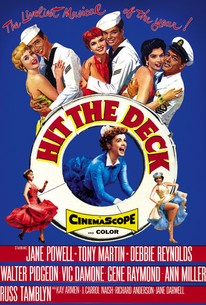 Hit the Deck is the second film version of the same-named 1927 hit Broadway musical. Though updated for the 1950s, the basic plot remains the same. Sailors Tony Martin, Vic Damone and Russ Tamblyn spend their entire shore leave in pursuit of three beautiful gals. Martin is "that way" about Ann Miller, Damone is stuck on Jane Powell, and Russ Tamblyn only has eyes for Debbie Reynolds. Some fun is extracted from the fact that Tamblyn is the son of by-the-book admiral Walter Pidgeon. Additional comedy relief is provided by Alan King (the same!) and Henry Slate as a pair of dumb-dumb shore patrolmen. The Vincent Youmans-Leo Robin-Clifford Grey-Irving Caesar score includes such standards as "Sometimes I'm Happy", "I Know that You Know", and the showstopping "Hallelujah". The 1930 version of Hit the Deck, starring Jack Oakie, was filmed by RKO; that version was purchased by MGM and hasn't been seen publicly in nearly 70 years.

Critic Reviews for Hit the Deck

The dialogue offers few surprises... The songs are old too.

With the limitations, [producer Joe Pasternak] has made it a pretty picture, replete with songs from the old footlight piece, complete with new lyrics and flashy production numbers.

It apparently has not improved with age.

The familiar three-sailors-on-leave plotline gets a big shot in the arm in this musical, which features an outstanding cast, good production numbers, and nice visuals.

The sailors-on-shore-leave theme may be familiar, but this version of the 1927 stage hit (with a totally new story) is immensely entertaining.

It works as an amiable time killer.

Audience Reviews for Hit the Deck

Colorful musical with lots of talent involved, if only the script was better this would have been more memorable.