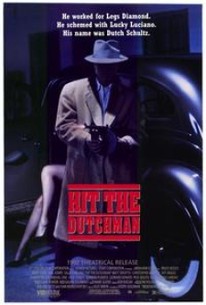 The ever economy-minded Menahem Golan -- of the legendary and defunct Cannon Films -- directed this gangster saga in Moscow to take advantage of low production costs, even shooting a second gangster film (Mad Dog Coll) at the same time, on the same locations, with the same cast. Hit the Dutchman stars Bruce Nozick as Arthur Flegenheimer, a thief recently released from prison who is recruited by noted hood Jack "Legs" Diamond (Will Kempe). Flegenheimer changes his name to Dutch Schultz and, thanks to his brutal and unscrupulous ways, rises to become Diamond's right-hand man during the bleak days of Prohibition. But Dutch shows no loyalty to Diamond. He first tries to steal Diamond's moll Frances (Jennifer Miller), then he tries to take over his bootlegging enterprise. Diamond retaliates by killing Dutch's friend Noey (Eddie Bowz). It then becomes total war, with Dutch recruiting enough manpower to have a showdown with Diamond's mob.

Will Kempe
as Legs Diamond

Critic Reviews for Hit The Dutchman

There are no critic reviews yet for Hit The Dutchman. Keep checking Rotten Tomatoes for updates!

There are no featured reviews for Hit The Dutchman at this time.