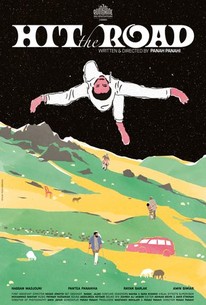 Panah Panahi, son and collaborator of embattled Iranian master Jafar Panahi, makes a striking feature debut with this charming, sharp-witted, and deeply moving comic drama. Hit the Road takes the tradition of the Iranian road-trip movie and adds unexpected twists and turns. It follows a family of four -- two middle-aged parents and their sons, one a taciturn adult, the other an ebullient six-year-old -- as they drive across the Iranian countryside. Over the course of the trip, they bond over memories of the past, grapple with fears of the unknown, and fuss over their sick dog. Unspoken tensions arise and the film builds emotional momentum as it slowly reveals the furtive purpose for their journey. The result is a humanist drama that offers an authentic, raw, and deeply sincere observation of an Iranian family preparing to part with one of their own.

Critic Reviews for Hit the Road

"Hit the Road" is at its best when simultaneously operating in two different gears.

For too much of its running time, Hit the Road is untethered from any kind of captivating narrative purpose.

Its 93 minutes whip by so airily, it's possible not to realize how much you've learned to love the family whose road trip you've shared in, until the credits roll and you immediately start to miss them.

The acting is note perfect across the board: six-year-old Rayan Sarlak is an effervescent explosion of rascally energy, while Madjooni is funny, laconic and pissed-off -- often all at once.

The son of Iranian filmmaker Jafar Panahi delivers a lean but affecting drama with a winning humorous streak.

Demonstrates a skill and control of the medium that's rare for a first film.

A great little movie about coping with grief as a family. [Full review in Spanish]

Panah Panahi's feature debut, Hit the Road, is a character study of a family on the road to help their eldest son escape the country.

Hit the Roadis a gut-punch of a film, strikingly gorgeous, as tender as a mother's touch, as uncompromising as an aggrieved father.

Disguises itself as a critique of Iranian society under the guise of being a family comedy.

A somewhat meandering drama given a dose of rocket fuel up the backside by the luminous presence of six-year-old Rayan Sarlak.

A beautiful and tender family love story that skillfully handles its tough themes about loss through a combination of laughter and melancholy.

There are no featured reviews for Hit the Road at this time.