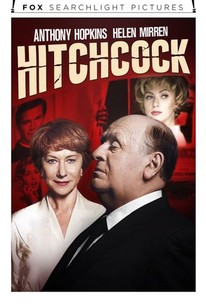 Critics Consensus: Though it suffers from tonal inconsistency and a lack of truly insightful retrospection, Hitchcock is elevated by inspired performances from its two distinguished leads.

Critics Consensus: Though it suffers from tonal inconsistency and a lack of truly insightful retrospection, Hitchcock is elevated by inspired performances from its two distinguished leads.

Critic Consensus: Though it suffers from tonal inconsistency and a lack of truly insightful retrospection, Hitchcock is elevated by inspired performances from its two distinguished leads.

HITCHCOCK is a love story about one of the most influential filmmakers of the last century, Alfred Hitchcock and his wife and partner Alma Reville. The film takes place during the making of Hitchcock's seminal movie Psycho.

RT on DVD & Blu-Ray: Life of Pi and Rise of the Guardians
Digital Multiplex: Argo, Life of Pi, and Much More
Five Favorite Films with Hitchcock Director Sacha Gervasi

Would have been much better off if it had taken a moment to sit down and decide on its own sensibility... It might have settled on the one, and retained its focus. But it didn't, so it doesn't, and it tells us nothing.

If Hitchcock himself was alive today, he'd undoubtedly turn his nose up.

The cod-psychologising is a little clunky but [Helen] Mirren's Mrs Hitch is inspiringly ballsy - with a dollop of the vulnerability that made you sob in The Queen.

The movie hits the beats, but lacks depth.

Occasional flair and an A-list cast are simply not enough to carry this erratic origins story.

What Gervasi and his scriptwriter John McLaughlin bring to the table are banality and predictability, quintessentially non-Hitchcockian qualities.

Most closely resembling a romantic comedy, the film's tone keeps the proceedings consistently entertaining, but also prevents intrusion of any serious drama.

As marvelous as is Hopkins, the film simply wouldn't be the same without the presence of Helen Mirren as Hitchcock's longtime companion Alma Reville.

As it turns out, few of the remarkable filmmaker's most interesting concerns or characteristics manage to break their way into Hitchcock.

Hitchcock may have right intentions in mind but not the best execution.

His obsessive nature is one of the things that makes Hitchcock such a mysterious figure. But we don't learn anything about what made him tick here.

What's ironic is that Psycho was such a radical, cinematographically novel film, but Gervasi is completely unable to find a meta-referential way of honouring that.

A voyeur peers through a hole in the wall at a woman preparing to shower, his breathing ragged, as he fantasizes about her life, her thoughts: ironically, comically, this work does just that to cinema's most honest voyeur, and fantasizes instead about his life while he was making Psycho. Fun, yah? Is any of it true? Maybe, maybe not, who cares? Like the master himself did before we are again THE VOYEUR, and get to vicariously relive peering through the hole in the wall, this time fantasizing about the guy who was fantasizing about us. That is fun. The cast, aware of the turnabout, the joke, revels in glee. How's yer ... yer breathing? Special mention: James D'Arcy's spot on Anthony Perkins, the decision to play Janet Leigh as a Doris Day ingenue (yoiks!), and best of all the loving mindfugging between Alfred and Alma (initials: AH!).

Slight movie. Admittedly, I am not a huge fan of Hitchcock. My husband is, and he really enjoyed this, so good one for a fan. Nicely filmed with good performances by cast.

Bearing no resemblance to the real Hitchcock, Hopkins seems like a caricature in a biopic that is only intriguing when it shows the production of Psycho but never when it focuses on his personal life - where marital conflicts and an imaginary Ed Gein are sadly contrived.

This is a diabolically clever and loving tribute to the Master of Suspense during the making of his groundbreaking masterpiece Psycho. While this film does focus on the making of Psycho, it also spends a lot of time looking at some of Hitch's obsessions, quirks, the trials and tribulations he had to go through to get the movie made, and more importantly, his relationship to his wife Alma, who played a far greater role in his life than some people may realize. The film also once in a while cuts to flashes of Ed Gein, sometimes interacting with Hitch (usually in a dream) to show the influence of him on Psycho, as well as to highlight some of Hitch's thoughts and fears. There's also some playful breaking of the 4th wall as well. The film isn't a complete or totally balanced portrayal of this wonderful director, but it nevertheless is quite satisfying. I think this film could have broad appeal, but is more rewarding if you're already familiar with Psycho, and Hitch himself. I loved seeing the recreations of the making of Psycho, as well as the crap Hitch had to go through with various execs to get his way. As fun as this is though, the heart of the film is the relationship between Hitch and Alma. You can tell they loved one another, and sometimes have a symbiotic connection, but still squabble and butt heads, mostly due to Hitch's often stubborn nature. I was leery when I first saw footage of Anthony Hopkins as Hitch, but he grew on me, and does a great job. Helen Mirren is absolutely fantastic as Alma, and might be the best part of this project. Scarlett Johansson in decent as Janet Leigh, Toni Collette is a delight as Hitch's secretary Peggy, and Jessica Biel is surprisingly solid, though underused as Vera Miles. As Ed Gein, Michael Wincott is creepily effective, and perfectly cast. Other notable names here include Ralph Macchio as Psycho's screenwriter, Michael Stuhlbarg as Lew Wasserman, and Kurtwood Smith as the head of the ratings board who was really critical of Psycho's subject matter. This is a strong, and loving director tribute, but it doesn't quite reach the heights of something like Tim Burton's Ed Wood. I loved the little touches, especially the music, and the little quirky things (like using Gein). You can tell that Sacha Gervasi cares about the subject, and really wanted to do justice to the subject. I'd say he was pretty successful. The film is a tad unbalanced and limited, but in the end is a splendid and highly enjoyable piece of work, especially if you dig on Hitch and films about filmmaking.