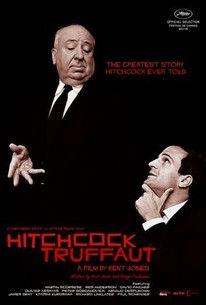 Critics Consensus: Essential viewing for cineastes while still offering rich rewards for neophytes, Hitchcock/Truffaut offers an affectionate -- and well-crafted -- tribute to a legend.

Critics Consensus: Essential viewing for cineastes while still offering rich rewards for neophytes, Hitchcock/Truffaut offers an affectionate -- and well-crafted -- tribute to a legend.

Critic Consensus: Essential viewing for cineastes while still offering rich rewards for neophytes, Hitchcock/Truffaut offers an affectionate -- and well-crafted -- tribute to a legend.

In 1962, Alfred Hitchcock and a 30-year-old François Truffaut sequestered themselves in a windowless Hollywood office for a weeklong conversation. The result: the seminal book "Hitchcock/Truffaut," published a half century ago, dissecting every film Hitchcock had made until then, illuminating his masterful techniques, making the case for the popular director as an artist, and influencing generations of filmmakers. Kent Jones brings "the Bible of Cinema" to invigorating life. He interviews filmmakers whose work has been profoundly influenced by Hitchcock-Martin Scorsese, David Fincher, Richard Linklater, Olivier Assayas, and many others.

On DVD This Week: Sully, The Magnificent Seven, Storks, and More
Krampus Is Decent Holiday Horror

Despite its historical subject, "Hitchcock/Truffaut" adeptly proves the timelessness of cinema.

Jones has laid enough of a foundation on Hitchcock's style that viewers can watch one of cinema's most famous moments with fresh eyes.

It brings the pages to life with clips and photos and the sound of the directors talking seriously and less seriously.

Pretension is always with us, but the documentary's main effect will surely be to make you want to see Hitchcock's films (including the marvel that is Marnie) all over again.

It is filled with revelations and also, of course, filled with excerpts from some of the greatest films ever made.

Cinema is a discussion, a process of learning from one filmmaker and teaching to the next, and in that wonderful way, 'Hitchcock/Truffaut' isn't just about that book. It is that book.

The result is an engaging, insightful documentary that is the perfect visual partner to a truly essential book.

I wish Jones spent a little more time on Truffaut's filmography where we can see Hitchcock's influence. But still, hugely entertaining and informative, the film is a required viewing for any serious cinephiles.

The movie is good for those who know the cine of both filmmakers, but it will turn out to be a bit disconcerting to those who do not know anything about them. [Full Review in Spanish]

It's an engaging and loving look at the nuts and bolts of Hitchcock's work.

Hitchcock/Truffaut is a gentle but revealing documentary...

In the end we remember the friendship that united Truffaut and Hitchcock, the communication they continued to have over the years. [Full review in Spanish]

What could have been a more perceptive discussion about Truffaut's seminal book turns out to be frustratingly superficial instead, moving quickly from one topic to the next without much sense of focus and not managing to offer much insight beyond the most reverential obvious.

The success of documentary is usually based on how much you already know and how much you learn about the main subject of the film. I knew a bit about Hitchcock, but I never dug deep into his archival footage or books written about him to understand the full psychology of the master of suspense. Hitchcock/Truffaut is a fascinating look into several of Hitch's films, and even some of Truffaut's, even if it is a little too short to call it a full exploration. Director Kent Jones gathers several of Hollywood's greatest filmmakers, including Martin Scorsese, Richard Linklater, Peter Bogdanovich, and David Fincher, to discuss Hitchcock's influence on the art of cinema and some of his most effective features. These commentators are certainly insightful, but you don't get enough from each of them to get full satisfaction. The film is based around a conversation between Hitchcock and Truffaut that took place in 1962. Truffaut, an up and coming filmmaker at the time, provides the viewer (or reader) a glimpse into what it would be like to interview the legendary filmmaker yourself. In many ways, Truffaut gets to ask all the questions any fan of Hitchcock has always wanted to ask. Whether it's addressing his catholic roots, sexual undertones in many of his features, his transition from silent film to talkies, the dreamlike quality to the films, or his iconic use of "god's eye" camera angles, it's all covered. As a film junkie, this type of coverage on one filmmaker is a dream come true. Again, the one thing I think the film could have improved upon was just giving more of everything and spending even more time on his expansive filmography. Spending a good chunk of time on Vertigo and Psycho was definitely needed, but I would love a more in-depth look at plenty of other films of his as well. However, overall, this documentary is a joy to watch, especially considering it's brilliant filmmakers commenting on Hitchcock, who is one of the greatest. 8.5/10

A fascinating listening to the oral history put forward by Hitchcock through his interviews with Francois Truffaut. Visuals are an added bonus.

THE MEN WHO KNEW SO MUCH - My Review of HITCHCOCK/TRUFFAUT (3 Stars) When I attended film school at UCLA, one book, which was considered required reading, stood out from among so many others. HITCHCOCK/TRUFFAUT, in which then-burgeoning director, Francois Truffaut, sat down in 1962 in a windowless Hollywood office with Alfred Hitchcock and a translator for a weeklong series of interviews that went film by film through his entire career. Recorded for posterity, think of it as one of the most fascinating podcasts ever committed to tape. Kent Jones' documentary, in turn, feels like required viewing for lovers of the cinema. Using talking heads-style interviews with a great roster of directors including Martin Scorsese, Wes Anderson, Peter Bogdanovich, Richard Linklater, Paul Schrader, and most effectively, David Fincher, the film serves not only as a great document of the interviews, but an inspiring dissection of what makes film the most impactful art form of the past 100+ years. At the time, Hitchcock wasn't taken seriously yet as an artist, his films considered light entertainments, while Truffaut was just at the beginning of his career and also working as a film critic for the influential publication, CAHIERS DU CINEMA. Once they sat down to talk, Truffaut worked his way through Hitchcock's career, film by film, sometimes shot by shot. The level of detail impressed me in the book and made me want to discover my own filmmaking aesthetic. The film shows how he influenced generations of other filmmakers. Additionally, we get the added treat of hearing bits and pieces of the interviews, though at times the intrusion of the translator became distracting. It's a small price to pay for the little gems in this film. Yes, Hitchcock thought of his actors as cattle and you hear in his own words how he didn't really care what they thought. Despite this, the man had an obvious enthusiasm for his work and took great pride in those moments of pure cinema in his films, such as the famous shower sequence from PSYCHO. Sadly, we learn very little about Truffaut in this documentary. I found it fascinating that his own films never felt Hitchcockian despite his obvious admiration for the man's work, and I would have loved to have known why. I suppose you can be a fan without feeling the need to be a copycat. Hitchcock demonstrated a great grasp of geography within a scene, how to establish his characters through point of view, and how to achieve a window into their psychology, sometimes without having them utter a single line of dialogue. HITCHCOCK/TRUFFAUT may be one only for fans and film students, but anyone who loves great, cinematic storytelling may find value in this swift, lovely primer on the subject.