The Hitchhiker's Guide to the Galaxy2005 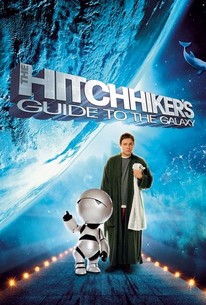 Critics Consensus: A frantic and occasional funny adaptation of Douglas Adams' novel. However, it may have those unfamiliar with the source material scratching their heads.

Critics Consensus: A frantic and occasional funny adaptation of Douglas Adams' novel. However, it may have those unfamiliar with the source material scratching their heads.

Critic Consensus: A frantic and occasional funny adaptation of Douglas Adams' novel. However, it may have those unfamiliar with the source material scratching their heads.

The Hitchhiker's Guide to the Galaxy Photos

Earthman Arthur Dent is having a very bad day. His house is about to be bulldozed, he discovers that his best friend is an alien and to top things off, Planet Earth is about to be demolished to make way for a hyperspace bypass. Arthur's only chance for survival: hitch a ride on a passing spacecraft. For the novice space traveler, the greatest adventure in the universe begins when the world ends. Arthur sets out on a journey in which he finds that nothing is as it seems: he learns that a towel is just the most useful thing in the universe, finds the meaning of life, and discovers that everything he needs to know can be found in one book: The Hitchhiker's Guide to the Galaxy.

Bill Bailey
as The Whale

Stephen Fry
as Narrator
View All

News & Interviews for The Hitchhiker's Guide to the Galaxy

Upcoming TV Fantasy Series That Could Be the Next Game of Thrones
Five Favourite Films with Bill Nighy
Director Garth Jennings on Son of Rambow: The RT Interview

View All The Hitchhiker's Guide to the Galaxy News

Critic Reviews for The Hitchhiker's Guide to the Galaxy

Adams would be pleased.

The problem is not that the film debases the book but that movies themselves are too capacious a home for such comedy, with its tea-steeped English musings and its love of bitty, tangential gags.

[It has] visual goofiness and flights of thespian bravura.

Fans of the novel can exhale, finally; panic is unwarranted.

Now comes English video director Garth Jennings theatrical take on Douglas' surreal outer space head-trip and I'm happy to say, for fans at least, this is one comedic deadpan adventure worth signing up for.

I was quite pleased with the not-too-Hollywood movie version of Hitchhiker's Guide to the Galaxy. Adams might have been, too. Adams zealots might be a bit disappointed, but maybe they will be happy that the movie was, at least, finally made.

There were moments in Hitchhiker where I was mildly amused, including a musical number by dolphins right before they leave Earth, but for the most part, the dry British humor just fell flat.

Could surely be a lot better, but there's much to enjoy in the film that exists, with its organic mixture of comic tones, and generally upbeat attitude of breezy fun.

. . .there is something crucial missing from the mix. Some heart and soul that might make you care more about the plight of plebby Arthur and his gang of intergalactic pals.

While it won't win any awards, it's fun as a time killer.

Fans of the book will probably be a little disappointed, but anyone encountering the Hitchhiker's Guide for the first time should be thoroughly entertained. It is very strange and very funny in a way that Adams' work exemplified.

Audience Reviews for The Hitchhiker's Guide to the Galaxy

Feeling in the mood for some cheeky Brit humor, all understated and smart and whatnot, then one will not do badly here. We take a tour of the galaxy, meet some strange lifeforms (very Star Wars bar scene), and struggle with the meaning of life (Monty Python territory, eh?). It's a fun outing, if a bit kinky and weird, but that's the Brits for you.

Quirky and funny sci-fi flick. Definitely unique and worth watching.

The Hitchhiker's Guide to the Galaxy Quotes