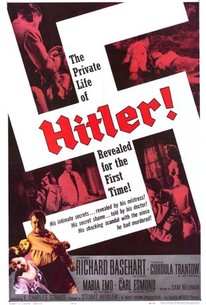 This film attempts to uncover the psychological insights on what made Adolph Hitler history's greatest monster. The Fuehrer (Richard Basehart) is beset with problems in his love life such as an Oedipal complex and impotence. Newsreel footage is inserted to give historical reference to the Nazi atrocities. Hitler is seen in this film as not a figure capable of rising to world dominance, but only a perverse, psychologically flawed madman. Despite the intentions to illuminate his character, no real insight is given about his rise to power, or the demons that plagued the most despicable human being ever to inhabit the planet.

Wants us to think of Hitler as a victim of his own sexual repression.

There are no featured reviews for Hitler at this time.