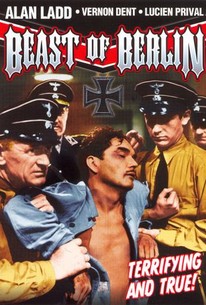 During the late 1930s, Adolf Hitler had many prominent supporters in the pre-WWII United States, so when films like this one and Chaplin's Great Dictator came out against Hitler, there was considerable controversy. Originally titled Hitler: Beast of Berlin, it was banned for a time. The full force of the original film may never be known as several key scenes were hacked out to make it less offensive and therefore ready for release. Since then, the original film has been lost. Though largely a chronicle of Nazi Germany, the story centers on a few courageous underground opponents of the fascist regime who quietly spread anti-Nazi propaganda and conspire to overthrow the government. The latter parts of the film deal with the dreadful concentration camps and the hero's harrowing attempt to flee to Switzerland.

George Rosener
as Wunderlich
View All

There are no critic reviews yet for Hitler -- Beast of Berlin. Keep checking Rotten Tomatoes for updates!

There are no featured reviews for Hitler -- Beast of Berlin at this time.