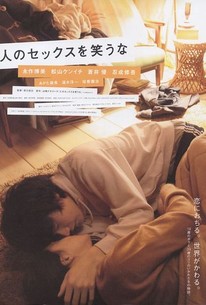 A passionate young man gets a crash course in the ways of love in this romantic comedy-drama from Japanese auteur Nami Iguchi. Mirume (Kenichi Matsuyama) is a nineteen-year-old student pursuing a degree in art at a college outside Tokyo. Mirume signs up for a printmaking class, and the handsome young artist makes a major impression on Yuri (Hiromi Nagasaku), an attractive professor in her mid-thirties who is teaching the course. Yuri seduces naïve Mirume, and before long he's convinced that she's the love of his life. When school shuts down for the summer break, Yuri heads north to her home in Kiryu City, and after uncovering her address, Mirume follows her home. Mirume arrives at Yuri's house to discover she has a husband (Morio Agata) who doesn't understand the purpose of Mirume's visit, and as the evening wears on, Mirume becomes increasingly reluctant to accept that Yuri wanted nothing more than a brief fling. Meanwhile, Mirume's infatuation with Yuri doesn't set well with En (Yu Aoi), one of his classmates who is clearly attracted to him. Hito no sekkusu o waruna (aka Don't Laugh At My Romance) was an official selection at the 2008 Hong Kong Film Festival. ~ Mark Deming, Rovi

There are no critic reviews yet for Hito no sekkusu o warauna (Don't Laugh at My Romance). Keep checking Rotten Tomatoes for updates!

There are no featured reviews for Hito no sekkusu o warauna (Don't Laugh at My Romance) at this time.