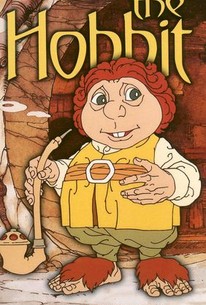 J.R.R. Tolkien's classic book about the Hobbit Bilbo Baggins and his unexpected adventures came to life in this animated, televised adaptation by Rankin-Bass Productions. Enthusiasts of Tolkien's lengthy and more demanding Lord of the Rings trilogy, as well as adult readers of The Hobbit, may be disappointed by this somewhat simplified adaptation of the book, though children and first-time readers of Tolkien will appreciate its whimsical introduction to the fictional world of Middle Earth. As the story goes, "In a hole in the ground, there lived a Hobbit...." Bilbo Baggins would much rather relax in his comfy hobbit-hole or take long walks in the Shire than have adventures. After all, "adventures make one late for dinner." Unfortunately, Gandalf the Wizard shows up one day with other plans for Bilbo. Gandalf introduces Bilbo to a rag-tag band of dwarves whose leader, Thorin Oakensheild, asks Bilbo for help in recovering his family's treasure from the fire-breathing dragon Smaug. Bilbo meekly accepts the offer, and soon finds himself on a long journey through Mirkwood forest, to Smaug's dark lair in the Lonely Mountain. Along the way, the unlikely band is captured and nearly eaten by trolls, shackled and prodded by goblins, tied-up in webs and hung from trees by giant spiders, and finally imprisoned by the swarthy, distrustful woodland elves of Mirkwood. With keen hobbit-wits and a magic ring he finds in the goblin caves, Bilbo manages to free the band on several occasions and helps them recover their lost inheritance. Understandably, much detail was omitted from Tolkien's novel to fit this made-for-TV adaptation -- most notably the story of the group's encounter with Beorn the shape shifter, and the somewhat complex issue of the Arkenstone, a legendary gem which Bilbo steals from Smaug's treasure-trove unbeknownst to the dwarves. Rankin-Bass Productions made another foray into Middle Earth several years later with The Return of the King, picking up where animator Ralph Bakshi left his unfinished adaptation of Tolkien's The Lord of the Rings.

John Huston
as Gandalf the Grey

Critic Reviews for The Hobbit

Rankin-Bass bring their typically serviceable animation, strong voicework, and corny folk ballads to The Hobbit… worthwhile for kids and not too bad for parents.

For a made for TV movie from the 70's I was impressed.

There is something undeniably fun about this kind of crisp, unfussy fantasy storytelling.

Cartoon adaptation of famous book is a great intro for kids.

This was magic to me when I was a child.

Drab, boring but with an oddly moody tone

A faithful and well-executed take on Tolkien's classic fairy tale. Though geared towards younger audiences, it should appeal to fans of any age.

Audience Reviews for The Hobbit

A fun but not great version of the story.

It's a pretty decent 70's made-for-TV animation. With only 77 minutes it ha enough entertainment value, but obviously cuts out a LOT of stuff from the book. One scene is completely narrated over to save time. The dwarfs are just background as opposed to characters, they walk about but don't say much. The thing I loved most was the character designs. I really liked the goblins and Gollum's amphibian look was interesting. It's a good try and I was pleased with the parts they did, rather than being distracted by the bits they cut.

My first intorduction to the world of Tolkein as a child. Not bad way to start at all.

Crack the dishes, smash the plates! That's what bilbo baggins hates! I'll stick to the book.