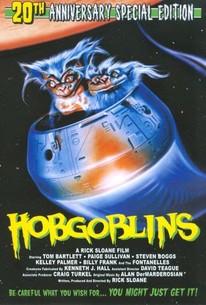 This film is set in a dusty old movie studio. Years earlier, a horror film had been in the works, but production had suddenly and mysteriously shut down. The reason becomes obvious when the title characters escape from the studio vaults. Chaos ensues, not to mention panic and havoc.

Without the MST3K assist, Hobgoblins is impossible to watch.

It's so bad, it doesn't even worth to talk about this.

This is seriously-- I cannot-- I mean, it's just so... The only reason I could sit through this mess was because of the MST3K commentary but even with it the movie too abysmal to tolerate.