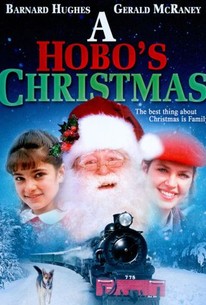 The hobo in the made-for-TV A Hobo's Christmas is played by Barnard Hughes. Drifting from place to place, Hughes finds himself in his hometown of Salt Lake City at Christmastime. Here he hopes to close old wounds and be reunited with his unforgiving son Gerald McRaney, and get to know the grandchildren he has never met. McRaney, still resenting the fact that Hughes ran out on his family 25 years earlier, gives his father only one day with his grandkids; after that, he's expected to leave and never come back. Everything that usually happens in a feel-good film of this nature does happen, but getting there is half the fun. If you missed the location-filmed A Hobo's Christmas when it was first telecast on December 6, 1987, despair not: the film is sure to pop up again on cable during the Yuletide season.

Critic Reviews for A Hobo's Christmas

There are no critic reviews yet for A Hobo's Christmas. Keep checking Rotten Tomatoes for updates!

Audience Reviews for A Hobo's Christmas

There are no featured audience reviews yet. Click the link below to see what others say about A Hobo's Christmas!