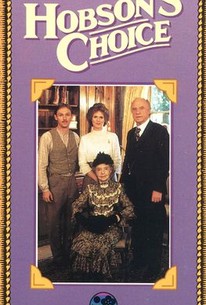 This third film version of Harold Brighthouse's play Hobson's Choice moves the locale from turn-of-century London to 1914 New Orleans. Horatio Hobson (Jack Warden) is the boozy, tyrannical owner of a shoe store. Hobson's daughter Maggie (Sharon Gless) falls in love with humble shoe clerk Will Mossup (Richard Thomas). When Hobson refuses to give the relationship his blessing, Maggie huffily takes her new boy friend out of the store to set up her own shop--which soon threatens to put Hobson out of business. In her last TV appearance, Lillian Gish plays the elderly benefactor who enables Will and Maggie to declare their independence. Hobson's Choice first aired on December 21, 1983. PS: A musical version of the play, Walking Happy, ran on Broadway in the mid-1960s, with Norman Wisdom starring as Will Glossop.

There are no critic reviews yet for Hobson's Choice. Keep checking Rotten Tomatoes for updates!

There are no featured reviews for Hobson's Choice at this time.