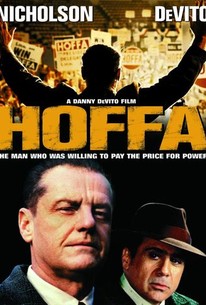 Critics Consensus: Jack Nicholson embodies Hoffa with malevolent relish, but a dearth of meaningful insight knocks this crime epic off the mark by a nose.

Critics Consensus: Jack Nicholson embodies Hoffa with malevolent relish, but a dearth of meaningful insight knocks this crime epic off the mark by a nose.

Critic Consensus: Jack Nicholson embodies Hoffa with malevolent relish, but a dearth of meaningful insight knocks this crime epic off the mark by a nose.

The life of powerful union leader Jimmy Hoffa is the subject of this biographical drama. The focus is strongly on Hoffa's public and political life, from his early days as a labor organizer to his later conflicts with the Federal government -- and, eventually, his mysterious disappearance. ~ Judd Blaise, Rovi

Don Vargo
as Driver with Pistol

Valentino Cimo
as Assailant No. 1

Sam Nicotero
as Counterman at Laundry

John Malloy
as Counterman at Roadhouse

Robert Eurich
as Reporter No. 1

Robert Maffia
as Reporter No. 2

Joanne Deak
as Woman in Penthouse

Kathy Hartsell
as Dancer with Cigarette

Peter Spellos
as Man in Crowd

Samson Barkhordarian
as Official at Hall

Alex A. Kvassay
as Airplane Pilot

Big and portentous, Hoffa feels like a series of acting exercises inflated to epic proportions. But as a portrait of unionism's most controversial figure, it offers only flickering illumination.

Hoffa, with its jaundiced script and a director wedded to his rose-tinted spectacles, is a mess, with only the sterling truculence of Nicholson's performance to mitigate it.

Hoffa shows DeVito as a genuine filmmaker. Here is a movie that finds the right look and tone for its material. Not many directors would have been confident enough to simply show us Jimmy Hoffa instead of telling us all about him.

With Jack Nicholson as the star and playwright David Mamet writing the script, Hoffa sounds unbeatable. But the movie is a major disappointment.

DeVito is blasting away with the audacity of a film student, making Hoffa an effort of extraordinary detail, craftsmanship, and directorial ingenuity.

Nicholson's intense, volcanic performance saves this part-fact, part-fiction biopic that's a little too in awe of its subject.

An extremely underrated film. Well worth watching, again and again.

A decent, but flawed movie. The performance by Nicholson is tremendous, and he really becomes Hoffa, but the rest of the film just isn't on the same level as he is. Unless you're a big fan of Jack, or particularly interested by Hoffa, pass.

Raises many questions and gives no answers, but this shouldn't be mistaken for artistic ambiguity.

Overblown but still interesting biopic with a classy performance from Nicholson.

Once again Jack Nicholson is over the top with his role as Jimmy Hoffa. From start to finish shows the life and uprising of Jimmy Hoffa. Danny DeVito played an excellent part also, and was surprised to see a very young John Reilly. Plenty of action, drama and suspense. If you only know what you have heard about Jimmy Hoffa, you need to see this film to get clear. I was amazed as to the added newsreels to see just how well Jack played the part. 5 Stars

"One day your gonna be president of the United States, Jim - Fuck that. One day I'll be president of the Teamsters." Jimmy Hoffa is a historical person I really don't know much about. I saw this only because of Jack Nicholson. Now after this, I've seen every movie he has ever been in. Nicholson does a powerful performance of the mysteriously disappeared union leader. David Mamet is a talented screenwriter. His version of this working class hero and his life may not be historically accurate but Danny DeVito's best directorial effort is still entertaining. "Never let a stranger in your cab, in your house or in your heart... unless he is a friend of labor."