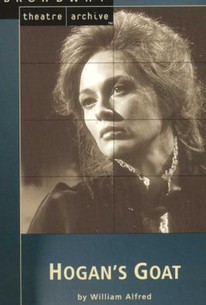 This 1971 television production features a performance of William Alfred's play, +Hogan's Goat. Directed by Glenn Jordan and starring Faye Dunaway, the play tells the story of the wife of a Brooklyn mayoral candidate. The performance led to Dunaway's meteoric rise to stardom in such films as Bonnie and Clyde and Chinatown. The play also stars Rue McClanahan, Philip Bosco, George Rose, and Margaret Linn.

There are no critic reviews yet for Hogan's Goat. Keep checking Rotten Tomatoes for updates!

Enjoyable rendition of the Broadway play that put Faye on the map. Rue McClanahan offers a fiery vignette of a soul twisted by grief. The whole cast is fine but Faye and Foxworth offer masterful characterizations.