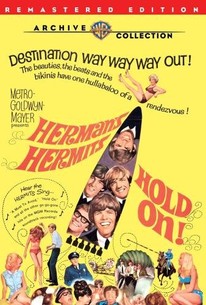 The career of the British Invasion pop group Herman's Hermits was in full, fan-shrieking, disc-selling orbit when their first top-billed movie came to theaters, so maybe it's only natural to think NASA would want to name a rocket after them. Well, at least that's what's at stake in this 1966 romp that has the five lads on a U.S. tour, where they're mobbed by various birds - and secretly monitored by a nerdy scientist to determine if they are rocket worthy.

Critic Reviews for Hold On!

There are no critic reviews yet for Hold On!. Keep checking Rotten Tomatoes for updates!

There are no featured reviews for Hold On! at this time.