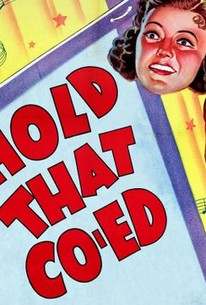 This tuneful campus comedy features aging star John Barrymore as a sly, blustery Southern governor with his eye on the Senate (aka Louisiana's Huey Long). He sees opportunity knocking when he learns how desperate his constituents have become to build their miserable state college football team into winners. He figures that if the team wins, so will he. To this end, he surreptitiously recruits a number of burly professional wrestlers to pose as football players. Unfortunately his chief opponent is running a similar racket with a rival university. When the governor's trickery is revealed on the eve of the big game, things look bleak until a quick-thinking coed shows up to save the day. The story is also titled Hold That Girl.

Brewster Twins
as Themselves

Barbara Brewster
as Herself

Gloria Brewster
as Herself

Critic Reviews for Hold That Co-Ed

Hold That Co-Ed isn't football and it isn't college, but thanks to John Barrymore it is highly acceptable college football comedy, with some lively political satire thrown in.

There are no featured reviews for Hold That Co-Ed at this time.