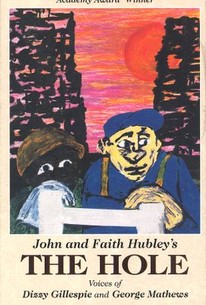 Produced by the innovative animation team of Faith and John Hubley, The Hole spotlights a pair of construction workers, one white, one black. Working deep underground, our cartoon heroes begin discussing the possibility of nuclear annihilation. Suddenly, an errant rat accidentally triggers an air-raid alarm. At the same time, a crane drops a load of debris with a thundering crash. Fearing that "the bomb" has indeed dropped, the black worker climbs to the surface, peeks outside, and...well, this is a very short bit of animation, so we won't give everything away. Suffice to say that The Hole, while brilliantly conceived and executed, may be a bit too serious for the Bugs Bunny and Wile E. Coyote crowd.

Critic Reviews for The Hole

There are no critic reviews yet for The Hole. Keep checking Rotten Tomatoes for updates!

There are no featured reviews for The Hole at this time.