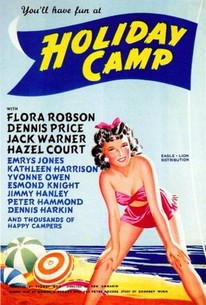 Holiday Camp was a British comedy that served the same purpose as Hollywood's The Egg and I--to act as the launching pad for a successful B-movie series. The film takes place at a British summer resort, where various character types interact. A murderer on the loose invades the camp, but the damage he does is slight--and in some instances, his presence is beneficial. Among the secondary characters are the members of the suburban Huggett family, headed by Jack Warner and Kathleen Harrison. They proved popular enough to be spun off into a "Hardy Family" style series of their own, with such titles as Here Come the Huggetts, Vote for Huggett and The Huggetts Abroad. ~ Hal Erickson, Rovi

Patricia Roc
as Herself

Gerry Wilmot
as Herself

This film is episodic, with some fascinating human material enriching its conventional novelette plots.

There are no featured reviews for Holiday Camp at this time.