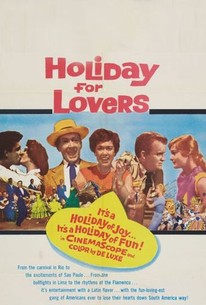 Director Henry Levin followed up this light romantic comedy with Where the Boys Are and started a beach trend going. This conventional story stars one of his favorite actors Clifton Webb as Robert Dean, the father of two lively teen-age daughters. He and his wife Mary (Jane Wyman) accompany their daughters on a South American junket. Meg (Jill St. John) and Betsy (Carol Lynley the 17-year-old model turned actress) are the teens. Since Robert is a psychiatrist, one would assume he has the inside scoop on the teen years, but as the family make stops in Lima, Sao Paulo, and Rio de Janeiro it is clear that the daughters are winning the day. Handsome young men enter the picture, and it is not long before romance follows right behind. ~ Eleanor Mannikka, Rovi

Jose Greco
as Himself/Dancer
View All

Critic Reviews for Holiday for Lovers

There are no critic reviews yet for Holiday for Lovers. Keep checking Rotten Tomatoes for updates!

There are no featured reviews for Holiday for Lovers at this time.