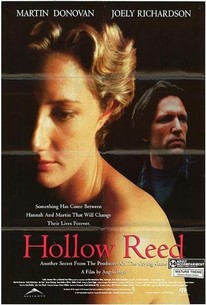 Violence and anti-gay prejudice combine to make a heated custody battle all the more ugly in this tense domestic drama. Hannah Wyatt (Joely Richardson) is a single mother who lives with her nine-year-old son Oliver (Sam Bould) and her boyfriend Frank Donally (Jason Flemyng). Hannah was married to Martyn (Martin Donovan), but their relationship ended bitterly when Martyn chose to finally acknowledge his homosexuality and left her to move in with his lover Tom Dixon (Ian Hart). Oliver has suffered several unexplained injuries in recent months, and one day Hannah comes home from work to discover that Frank has severely wounded Oliver's hand when he lashed out with violence over a minor bit of misbehavior. Hannah kicks Frank out of the house, but when he returns -- tearfully begging forgiveness and claiming he'll never hurt Oliver again -- she takes him back. Martyn learns of Frank's violence against his son, and she sues to have full custody of Oliver for the sake of the child's safety. However, Hannah is terrified of both losing her son and being left without a man in her life; she and Frank join forces in court against Martyn, using his homosexuality as their chief weapon against him and trying to poison Oliver's mind with homophobia against his father. Hollow Reed's soundtrack features selections recorded for the film by Elvis Costello, Annie Lennox, and Paul Weller.

Rich Cline
Shadows on the Wall
View All Critic Reviews (12)

There are no featured audience reviews yet. Click the link below to see what others say about Hollow Reed!