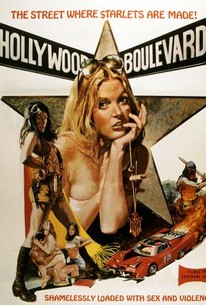 Allan Arkush and Joe Dante co-directed this campy spoof of exploitation films -- Roger Corman's schlock factory in particular. Candice Rialson stars as Candy Wednesday, a movie hopeful who wants to be a star. Her slimy agent Walter Paisley (Dick Miller) directs her to the portals of Miracle Pictures, where she lands a plum role in the film "Machete Maidens of Maratau." Lead actress Mary McQueen (Mary Woronov) becomes jealous, and a series of disturbing murders occur, culminating in a shoot-out on top of the Hollywood sign.

Charles B. Griffith
as Mark Dentine

Todd McCarthy
as Author
View All

The slapped-together élan is enchanting

My idea of heaven would be a drive-in theater on an eternal summer night . . . with an endless procession of movies like this.

A cheap, ultra-low-budget movie about production company Miracle Pictures ("If it's a good movie, it's a Miracle!") making...a cheap, ultra-low-budget movie! Some funny gags and plenty of in-jokes concerning how these movies get made on a shoestring hampered by some boring stretches (driving along Los Angeles freeways, the slasher stalking sequence.) I guess that's about what you'd expect from a script written in a week.