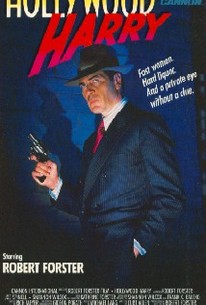 Written, directed by, and starring Robert Forster and his daughter Katherine, Hollywood Harry is a routine detective/human interest story about a low-end P.I. who sleeps with women at a rate of $5.00 each (they pay him) and is drinking his way into oblivion when his niece (Katherine Forster) arrives on the scene to snap him into shape. A client also comes in with a case Harry has to accept; money is running low. And so as the profligate detective is ready to hunt down his client's daughter, roped into porno films against the irate wishes of her father, his niece Danielle comes into the office indicating that her parents may be dead, while Harry's sharp secretary appears to have come into some sudden wealth. The plot lurches forward in several directions at once, as Harry's niece gets him out of the doldrums and into work.

Frank Pesce
as Peter The Producer

Pete Schrum
as Clapper
View All

There are no critic reviews yet for Hollywood Harry. Keep checking Rotten Tomatoes for updates!

There are no featured reviews for Hollywood Harry at this time.