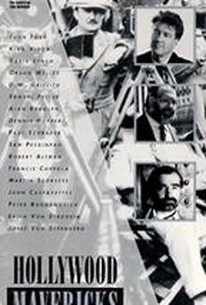 This documentary respectfully interviews a number of important American directors who have in one way or another "bucked the system." It also explores the life and work of earlier American mavericks through the tributes, reflections, and recollections of the first group. Prominent among the living directors interviewed are Martin Scorsese, Peter Bogdanovich, Francis Ford Coppola, Paul Schrader, and David Lynch. Among the directors who are discussed are Orson Welles, D.W. Griffith and Samuel Fuller. Clips from the films of these men, and interviews with important actors who have worked with them (e.g. Robert DeNiro) are another feature of this documentary, commissioned by Japanese public television corporation NHK.

There are no critic reviews yet for Hollywood Mavericks. Keep checking Rotten Tomatoes for updates!

There are no featured reviews for Hollywood Mavericks at this time.