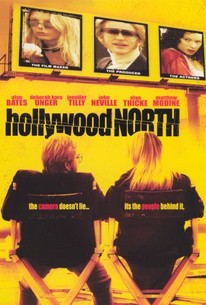 Hollywood North loses bite, first by being exactly the kind of movie it satirizes and by being so dated.

A forgettable fluffy Canadian film about runaway production during the heady days of Tax Credit filmmaking in the late 70s.

...the movie seems content to simply exist as a wacky comedy (how else do you explain the presence of Alan Thicke?), which is somewhat disappointing.

There isn't a lot that is original about

What the film lacks in bite and originality, it makes up for in humor and charm.

you ultimately can't help but feel a little sorry for this movie.

There are no featured audience reviews yet. Click the link below to see what others say about Hollywood North!