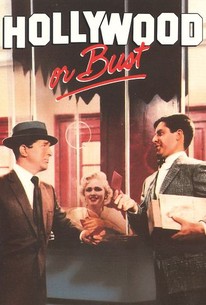 Dean Martin and Jerry Lewis made their last joint film appearance in the girl-filled musical Hollywood or Bust. The thinnish plot finds inveterate film fan Jerry making a cross-country journey to Tinseltown for the purpose of meeting his favorite screen star, the buxom Anita Ekberg (the film's title, need it be added, has a double meaning). Dean goes along for the ride, hoping to expand his bankroll during a Las Vegas stopover. The boys are joined by a third traveller, an enormous Great Dane named Mr. Bascomb; along the way, the trio becomes a quartet when pretty Pat Crowley hitches a ride. The finale takes place in Hollywood, naturally, as Jerry wreaks havoc at a film studio which looks suspiciously like Paramount. All reports indicate that Hollywood and Bust was an unhappy shoot, with Jerry Lewis behaving so obstreperously that director Frank Tashlin ordered him off the set and told him to go home until he learned to behave himself; to this day, Lewis cannot bring himself to watch the film. Happily, the animosity between the two stars never comes across on screen, and as a result Hollywood or Bust is a most enjoyable diversion.

Critic Reviews for Hollywood or Bust

Tashlin indulges a riot of poetic fancies where charm and comic invention alternate in a constant felicity of expression. The plot is thin, certainly, but the merit is all the greater.

Dean Martin and Jerry Lewis team up for the last time (aw shucks!).

Audience Reviews for Hollywood or Bust

The last film the boys did together is a throwaway, both of them having done 10 years of their act, so their routines were familiar to them both (and to us). Still, whether either of them would admit it by this stage (Martin reportedly told Lewis angrily once that "all you are to me is a dollar.") or not, their chemistry continued to pop. While certainly their routine is dated, a smile or two is still within their grasp as this work demonstrates. Pat Crowley and Anita Ekberg are little more than window dressing to the boys antics, and they're not bad, but in this film a Great Dane has more to do.