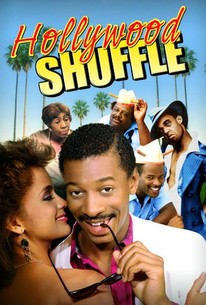 This satirical look at the ambivalent relationship between Hollywood power brokers and African-American performers marked the writing, producing, and directing debut of Robert Townsend. The filmmaker also stars as Bobby Taylor, a struggling actor looking for his big break despite his family's and co-workers' reservations about his chosen career path. While working a day job flipping burgers, Bobby heads out to insulting cattle calls where white casting agents pass judgement on whether he seems "black enough." Meanwhile, he imagines himself playing Sam Spade, Rambo, and other movie heroes rather than the stereotypical roles actually available to him. When Bobby actually does win one such pimp-daddy part, however, he is forced to choose between accepting work that opens doors, but ultimately demeans him and returning to obscurity with his principles intact. Hollywood Shuffle's enormous supporting cast includes a wealth of black actors, from then-unknowns such as Damon Wayans to veterans such as 227 star Helen Martin. Self-financed and filmed on scraps of hand-me-down celluloid, the film helped establish actor Townsend as a director of note and also kick-started the career of co-screenwriter and co-star Keenen Ivory Wayans, who would cast Townsend in his own directorial debut the following year.

Lou B. Washington
as Tiny

Kim Wayans
as Customer in Chair

E.J. Murray
as Actor in Audition

Tammy Kaitz
as Model with Award

Nancy Schier
as Client #1
View All

Always enjoyable and Townsend is great.

Brimming with imagination and energy, Hollywood Shuffle is the kind of shoestring effort more appealing in theory than execution.

Improv talent Robert Townsend is pretty much the whole show.

Despite the film's conspicuously minuscule budget and shaky narrative structure, it is funny. If you value enthusiasm and imagination more than glossy sophistication, you'll laugh.

Mr. Townsend has taken aim at the industry's funny bone and struck a solid blow.

Under the circumstances, Hollywood Shuffle is an artistic compromise but a logistical triumph, announcing the arrival of a new talent whose next movie should really be something.

Hollywood Shuffle is a film from someone who chose to do more than the average spoof. It shows the insight, intelligence and sensitivity of a talented artist.

...would've fared much, much better had its myriad of punishingly lame comedic vignettes been excised completely.

A very funny satire that still holds up

...presaged a revolution that never came.

Although haphazardly paced and scattershot in approach, when it works, this satire on Hollywood's attitudes toward African-Americans is downright hilarious.

Parts of this film are soda through your nose funny.