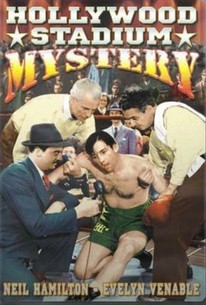 Among the best-known of Republic's "B" pictures of the late 1930s, Hollywood Stadium Mystery is a neat and satisfying whodunit with very little "waste" footage. Neil Hamilton is his usual stalwart self as District Attorney Bill Devons, who tries to solve a murder that was committed in full view of hundreds of boxing fans at Legion Stadium. The victim was a contender for the championship, and there are no end of suspects to choose from. Complicating matters is the well-meaning but annoying interference of Polly Ward (Evelyn Venable), a murder-mystery writer who fancies herself a super sleuth. Radio personality Jimmy Wallington is appropriately cast as a glib sports commentator, while perennial cowboy sidekick Smiley Burnette shows up to offer a series of automobile imitations! Hollywood Stadium Mystery was written by Stuart Palmer, best known for his "Hildegarde Withers" stories.

Al Bayne
as Max
View All

There are no critic reviews yet for Hollywood Stadium Mystery. Keep checking Rotten Tomatoes for updates!

There are no featured reviews for Hollywood Stadium Mystery at this time.