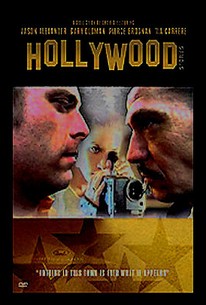 Gary Oldman, Jason Alexander, Rob Schneider, Pierce Brosnan and Tia Carrere star in this collection of five short films set in Tinseltown. A talking screenplay gets a nasty wake-up call on the set in "Sammy the Screenplay"; a film student adds overly realistic special effects to a horror flick in "Cut"; and Hollywood's freakiest citizens haunt the same bar in "Don't Give Me the Finger." Other shorts include "Exit 8A" and "Who's Kyle?"

Unless you spend a lot of time at film festivals (or glued to the Sundance Channel), odds are you don't get to see many short films. And that's kind of a shame.

There are no featured reviews for Hollywood Stories at this time.