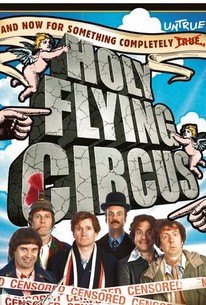 In 1979, Britain's most beloved comedy troupe, Monty Python (John Cleese, Graham Chapman, Terry Gilliam, Eric Idle, Michael Palin and Terry Jones) made film history when they teamed up with producer George Harrison to create the blissfully irreverent Biblical comedy The Life of Brian. Though the movie was a critical and commercial hit, it also stirred up torrents of indignation, particularly from Christian groups who found it transparently offensive. The Pythons disagreed, and even argued that the film contained a highly religious message buried in its comedy. Things came to a boil when Cleese and Palin participated in a talk show aired by a Catholic broadcaster and featuring a Bishop from the Church of England. This 2011 docudrama travels back to the late 1970s to recreate many of the events surrounding the film's controversy, including that famous talk show appearance. It stars Steve Punt as Idle, Charles Edwards as Palin, Rufus Jones as Jones, Phil Nichol as Gilliam, Darren Boyd as Cleese and Thomas Fisher as Chapman.

There are no critic reviews yet for Holy Flying Circus. Keep checking Rotten Tomatoes for updates!

There are no featured audience reviews yet. Click the link below to see what others say about Holy Flying Circus!