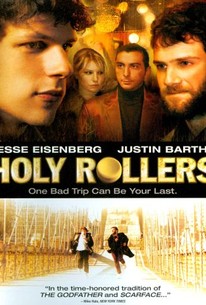 Critics Consensus: Despite a promising premise and a solid central performance from Jesse Eisenberg, Holy Rollers lacks the depth necessary to overcome its cliched script.

Critics Consensus: Despite a promising premise and a solid central performance from Jesse Eisenberg, Holy Rollers lacks the depth necessary to overcome its cliched script.

Critic Consensus: Despite a promising premise and a solid central performance from Jesse Eisenberg, Holy Rollers lacks the depth necessary to overcome its cliched script.

"Holy Rollers" is inspired by actual events in the late 1990s when Hasidic Jews were recruited as mules to smuggle ecstasy from Europe into the United States. It is the story of a young Hasid from an Orthodox Brooklyn community whose neighbor propositions him to transport "medicine" for an Israeli dealer and his girlfriend. He is exposed to the exciting and gritty worlds of Manhattan and Amsterdam nightlife, and as the business grows, his double life begins to rip his family apart and the community becomes suspicious of his illegal activities. Caught between life as a smuggler and the path back to God, he goes on the run, forced to make a fatal decision that could bring the entire operation crashing down.

Danny A. Abeckaser
as Jackie

We expect more than we eventually get, even if what we get is watchable throughout.

[A] breathless, enjoyable comedy-thriller based on the true story of how Hassidic Jews were recruited as mules in the late 1990s to smuggle ecstasy pills from Amsterdam into New York.

Jesse Eisenberg, in the main role, enhances the film again and again with his comic timing and ability to nail the part of a sheltered ingénu with an incipient rebel streak. It might be dodgy merchandise, but he sells it all the same.

This is more accurately a film about a revolution against innocence and the vacuum it leaves behind.

This is moviemaking on autopilot.

If ecstasy was as boring as this film about it then the war on drugs would've been over 25 years ago.

We have seen this all before; from Jesse Eisenberg's trademark jitters and speedy speech to the inevitable tragic story arc and the morphing of smalltime dabbler to swaggering kingpin, undone by over-confidence. Oy vey.

An arrhythmic but very interesting film... [Full review in Spanish]

Holy Rollers' innocence-lost, you-can't-go-home-again arc is something of a cliché, but the film remains refreshingly nonjudgmental about its hero's burgeoning criminal career.

The one and only problem I had with HOLY ROLLERS was the pacing. I found myself getting slightly bored and at times, looking at my watch. I'm sure it's not easy to mesh Orthodox Judaism and Ecstasy, but Asch did a pretty good job.

Offering the viewer hardly any reason to feel this story is credible.

Despite a suitably nervy turn from Eisenberg, there's no energy to the film-making or much insight into the story.

Feeling left in the slow lane of life, New York Orthodox Jews try drug running for awhile, trading on their outsider status. Families disapprove, but they do improve the drug-running game, because they're good with money ... ! Oy.

An interesting idea executed in an un-interesting way, 'Holy Rollers' had my attention, but due to a lack of interesting characters and some serious pacing issues failed to hit the mark.

For a movie based on a true story about Hasidic Jews working as drug mules trafficking ecstasy in the late 90s this movie was really dull. Sure, maybe the limitations are the result of this being a low budget indie, but I think it would have been worse as a big budget major studio affair. The real issue is that the idea is inspired, but the script, direction, and acting are all lacking. I liked the idea of a young guy torn between religious studies and making tons of money in the drug trade, but they really dropped the ball with the concept here. It all felt rehashed, unoriginal, and jut kinda blah. It doesn't help that the lead is done by Jesse Eisenberg. I like him, but he just doesn't really appear to be trying here. Justin Bartha however is awesome. He gives the best performance, is the most interesting character, and the focus clearly should have been on him. I wasn't totally bored, but I didn't really care a whole lot either. Also, the washed out look really didn't fit for me and seemed unnecessary. You could see it, but I would ONLY recommend it for hardcore completists.

Sometimes very cliche, but with a terrific performance by Jesse Eisenberg and a nice screenplay, Holy Rollers is a good film to watch.