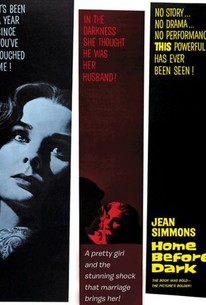 Wearing a curiously (and perhaps deliberately) unattractive blonde wig, Jean Simmons stars in the tense psychological drama Home Before Dark. Having just recovered from a nervous breakdown, Charlotte Bronn (Simmons) returns from a mental institution to the home she shares with her academician husband Arnold (Dan O'Herlihy). Though he tries his best to help Charlotte re-adapt, his efforts are undermined by the insensitive meddling of her stepmother Inez (Mabel Albertson) and stepsister Joan (Rhonda Fleming) who may or may not have been carrying on a romance with Arnold in Charlotte's absence. The untenable situation at home leads Charlotte into a romance with college professor Jake Diamond (Efrem Zimbalist Jr.), who as an ongoing target of anti-semitism has plenty of his own emotional baggage to deal with. What is remarkable about Home Before Dark is that it is a film without a villain: even the most unpleasant characters are drawn as three-dimensional human beings, who behave badly because they really don't know any better. The film was adapted by Robert and Eileen Bassing from Eileen's same-named novel.

Critic Reviews for Home Before Dark

Audience Reviews for Home Before Dark

Unjustly obscure drama with an outstanding performance from Jean Simmons. Attempting a serious look at the fragile period after release for treatment of mental distress this does a good unsentimental job with a somber tone and excellent work from the entire cast with the always excellent Jean delivering one of her career best.