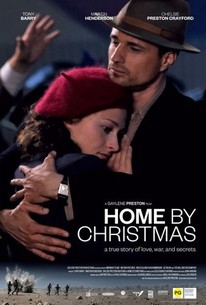 New Zealand-based filmmaker Gaylene Preston blends fact and fiction in this drama, based on her father's experiences during World War II. Preston's father Ed fought in Italy and North Africa during World War II, but while she was aware of his military record, he was reluctant to talk at length about his wartime experiences during much of his life. Not long before he died, Gaylene persuaded Ed to sit for some interviews in which he shared the details of his life in uniform, as well as his years as a prisoner of war. In Home By Christmas, Preston has dramatized her conversations with her dad, with actor Tony Barry playing Ed as he talks about what he did during the war along side reenactments of his stories. Home By Christmas also stars Chelsie Preston Crayford as Gaylene's mother Tui, who has her own tales to tell about her struggles raising a family while her husband was overseas, held by enemy troops. Home By Christmas was an official selection at the 2010 BFI London Film Festival.

Tony Barry
as Ed the Elder

Gaylene Preston
as Herself

Critic Reviews for Home by Christmas

There are no critic reviews yet for Home by Christmas. Keep checking Rotten Tomatoes for updates!

There are no featured reviews for Home by Christmas at this time.