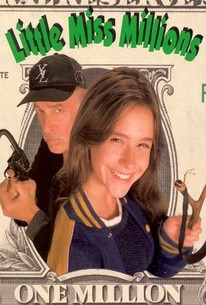 In this comedy-adventure for the family, Heather (Jennifer Love Hewitt) is a girl who can't stand her foster parents, so one day she runs away from home in order to track down her real mother. However, Heather's stepmother wants her back -- not because she cares about her, but because Heather is worth several million dollars, and she wants to make sure that she doesn't lose her meal ticket. Private detective Nick Frost (Howard Hesseman) is hired to find Heather and bring her back home, but it turns out that the stepmother has a trick up her sleeve -- once Nick finds Heather, rather than pay him, stepmom calls the FBI and tells them that Nick has kidnapped her daughter. Home for Christmas was originally released under the title Little Miss Millions. Jennifer Love Hewitt was 14 at the time -- a year away from her star-making role in the TV series Party of Five.

Critic Reviews for Home for Christmas

There are no critic reviews yet for Home for Christmas. Keep checking Rotten Tomatoes for updates!

There are no featured reviews for Home for Christmas at this time.