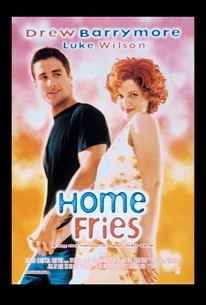 Dean Parisot, who won a live-action short Oscar, made his feature directorial debut with this black comedy from a producer team that included Barry Levinson and Lawrence Kasdan. A philandering stepdad is the victim of vengeful Mrs. Lever (Catherine O'Hara), who sends her sons out to scare him to death. Cobra helicopter pilots Dorian (Luke Wilson) and Angus (Jake Busey) accomplish this by strafing the forest at night as the stepdad runs in terror. No one knows that pregnant Burger-Matic cashier Sally (Drew Barrymore) was the stepdad's mistress. However, since Burger-Matic and Cobra headsets share the same radio frequency, the notion surfaces that maybe Burger-Matic workers overheard something; Angus suggests that Dorian take a job at the fast-food joint in order to determine just who knows what. Once on the job, however, the situation gets twisted after Dorian falls hard for Sally. The chain-smoking Mrs. Jackson (Shelley Duvall), Sally's trailer-trash mother, turns up, as does her redneck father, Red (Lanny Flaherty). In an inside film reference, Angus mentions the classic "Lamb to the Slaughter" episode of Alfred Hitchcock Presents. Shown at the 1998 Toronto Film Festival.

Shane Steiner
as Soldier in Jeep

Jean Donatto
as Nurse No. 1

Mona Lee Fultz
as Nurse No. 2

The actors are tickled by their characters and have fun with them, and so I did, too.

Drew is cute as always and so's Wilson

There's a good movie somewhere in here trying to escape... the audience can relate to that desire.

Drew comes through for us. Her easy charm and winning smile put us back on track, giving us something familiar and wonderful to cling to.

For every good performance and delightful, well-written scene, there would be a large amount of off-the-wall material that did not work at all.

It's one thing to be offbeat, and another thing entirely to be off-pitch.

What's interesting is pretty much unintentional, centering in the film's performances, which are excellent indeed.

The home fries are too salty for my taste.

The description of the movie on here isn't at all what I remember of it, but maybe I should see it again. I remember a romantic comedy involving a pregnant Drew Barrymore. I really liked it too, it was funny enough, and dramatic enough to make a good rom-com.

Mindless entertainment. I was impressed with Catherine O'Hara's acting -- it must be hard to be that crazy. Drew Barrymore is always cute.

The amiably offbeat premise and the sweet, vulnerable performance of Drew Barrymore and Luke Wilson help to offset the meandering contrivances of the script and Dean Parisot's uneasy direction. Catherine O'Hara has some eerie moments as the boys' demented mother.