Home from Home: Chronicle of a Vision (Die Andere Heimat)2015

Home from Home: Chronicle of a Vision (Die Andere Heimat) (2015) 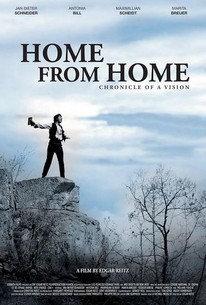 Set in a dreary, unforgiving mid-19th century German village in Hunsrück, Home From Home captures the plight of hundreds of thousands of Europeans who emigrated to faraway South America to escape the famine, poverty and despotism that ruled at home. Their motto was: "Any fate is better than death". Edgar Reitz's film is a heart-wrenching drama and love story set against the backdrop of this forgotten tragedy. It encompasses a time of tribulation and illuminates the revolutionary and intellectual spirit present in the souls who are center of this tale. Jakob, our protagonist, tries to immerse himself in literature and learning, as the rest of his family toils to fend off starvation. He dreams about leaving his village, Schabbach, for a new life in Brazil and the freedom of the wild South American jungle. He studies the languages of the native South Americans and records his heroic attempts to escape the rural confines of Hunsrück in an astonishing diary that not only tells us his story but reflects the aspirations and philosophies of a whole era. Everyone who encounters Jakob is drawn into the maelstrom of his dreams: his parents, bowed and broken from years of labor making a living from the soil his scheming and brash brother, Gustav and above all Henriette, the fetching daughter of a gem cutter fallen on hard times. Gustav's return from military service is destined to shatter Jakob's world and his love for Henriette, as it symbolizes the necessary rift that will set into motion the unraveling of the regimented family structure. Jakob is not content to allow himself to be stuffed into a mold typical of a young laborer and rebels against his tormentors by assaulting the local marshals in an attempt to stand in solidarity with a fellow revolutionary both are cast into prison and brought near death. For a time Jakob finds a new home after his release, then another, before events beyond his control finally reunite him with his family in Schabbach. It is here that Jakob's colorful and magnetic influence is most strongly realized, and he realizes his place in the world is not that of his dreams. Spectacular landscapes and an ultra-high definition shooting format elevate Edgar Reitz's Home Away From Home from an unforgettable story to a breathtaking cinematic experience.

Philine Lembeck
as Florinchen
View All

Critic Reviews for Home from Home: Chronicle of a Vision (Die Andere Heimat)

Nearly four hours long, "Home From Home" is imbued with the villagers' attachment to the land, but while dutifully capturing the period, the film feels less layered than Mr. Reitz's past work.

For all of its evident toil in recreating historically accurate environments and researching the precise conditions in varying regions, it has little force as a work of cinema.

This beautifully shot black-and-white feature is accessible even for those unfamiliar with Reitz's previous work.

Home From Home is especially strong at presenting neighboring towns as separate worlds, a la Thomas Hardy, far enough apart by horse or foot to be as distant as foreign lands.

Home from Home: Chronicle of a Vision is a daunting four hours long, but so immersive and exquisitely photographed that time shoots by in the manner of the best box set.

It is nearly four hours, but never dull for a moment; indeed, there is a boxset addictiveness to the whole thing.

"Home From Home" isn't the kind of definitive post-mortem on a decade that "The Second Heimat" was, but it will speak to anyone who's ever felt trapped by their surroundings and dreamed of escape.

On paper it is a yawn, especially when you clock the four-hour running time, but you will be sucked in to the lives of the characters and the mesmerising detail of their existence.

The first masterpiece of 2015. Spellbinding, lyrical and breathtaking. Epic in scope while intimate in its humanism. I could have watched 4 more hours.

Reitz and co-writer Gert Heidenreich define home as the bosom of family, as an emotional shelter or storm, rather than simply the roof over Jakob's head

Reitz (who was in his eighties during production) directs with peerless finesse, as he mines authenticity from an inexperienced cast and brings a bygone era to vivid and engrossing life.

Deeply embedded in a sense of local community and the familiar rhythms of the changing seasons, the grape harvest and annual festivals, Home from Home evokes the work of Thomas Hardy and the look of photographer Ansel Adams.

There are no featured reviews for Home from Home: Chronicle of a Vision (Die Andere Heimat) at this time.