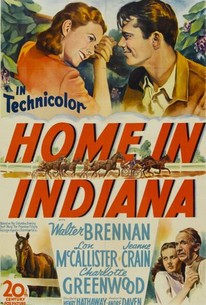 In this touching drama, city-slicker Sparke Thorton goes to live on his aunt and uncle's horse farm in the country. The couple have basically retired from horse-breeding and only have one trotter left. Sparks fly when the young man meets the lovely Char and Cri-Cri, the two farm girls who introduce him to the finer aspects of country life including the cool pleasures of the swimming hole. He soon decides that he wants to raise a filly and become a champion racer. His uncle and the handyman help him. Much of the film was shot on location on racetracks in Kentucky, Indiana, and Ohio. There is also a sequence depicting the filly's birth, but it is sensitively handled.

Francis Ford
as Ed
View All

Critic Reviews for Home in Indiana

For horse lovers, this movie can't be more on point. [Full review in Spanish]

There are no featured reviews for Home in Indiana at this time.