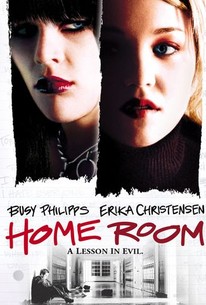 American independent filmmaker Paul F. Ryan makes his feature debut with the psychological drama Home Room. The students of Valley High School try to get on with their lives in the aftermath of a traumatic school shooting in which nine students were killed. Even though the perpetrator is dead, the townspeople still want to find some answers. Detective Martin Van Zandt (Victor Garber) decides to interrogate high school student Alicia Browning (Busy Philipps), who was present during the attack. Because of her cynical attitude and dark fashion choices, she is viewed as a possible threat. Principal Robbins (James Pickens Jr.) sentences her to regular hospital visits with the pretty and popular Deanna Cartwright (Erika Christensen), who was seriously injured in the attack. Alicia and Deanna overcome their initial differences and develop a nurturing friendship with psychological help from Dr. Hollander (Holland Taylor).

Jenna Z. Wilson
as Student by the Green Car
View All

Alicia and Deanna's journey toward friendship, or at least a truer understanding, is moving.

In the midst of this didactic, self-conscious movie about a high school shooting comes an extraordinary and intense performance by a young actress named Busy Philipps, which elevates the whole picture.

Overall, it plays like the world's longest -- over two hours -- after-school special.

Too often crosses the line between good melodrama and rank cliché.

At 133 minutes, Home Room is sluggishly paced and refuses to lighten up for even a second.

Though the film is overlong (it runs over two hours), it's never boring - mainly due to a pair of fantastic lead performances.

The relationship that Deanna and Alicia forge is fascinating...as it allows for a genuine search for truth instead of something that is forced or contrived.

Thanks to Philipps's explosive need and Christensen's struggling vulnerability, we see the human costs inherent in tragedy once the TV trucks have left and only the haunting remains.

Dismal but not disheartening, this tale of picking up the pieces is as cutting as those pieces can be and as satisfying as cleaning up the mess.

Its noble intentions are undermined by syrupy, movie-of- the-week direction.

A powerful movie that loses some of its momentum by touching on too many stories. It's not always easy to watch, but it's thought provoking.

Might have appreciated it better had I not gone in with the assumption that it's about the school shooting (and what leads to it; a la "Klass") instead of the after-effects. But still, the movie is quite flawed for what it is. Tries to make a social commentary which gets lost somewhere in all the melodrama. The actress playing Alicia wears too much make-up for what her character requires. Fails to generate the emotional effect it should have aimed for and ends up as a teen drama (almost leaning towards a chick flick) overall. To worsen it all, it's unnecessarily lengthy. That could have been avoided in the very least. If you're looking for A LESSON IN EVIL, this isn't the right one. Having said that all, it's not as bad as some movies I've recently watched. "Go figure" as Alicia might have said!!

Where was I when this one came out? This film is a jewel. It opens as a shooting at an American high school has just ended. One girl witnessed the whole thing. What did she see? Another traumatized by the event. An unlikely friendship unfolds, and the truth is revealed. It's lengthy, but never gets dull. The end filled me with emotion. This one is a winner.

Very offbeat. No real opinion on it, except I did manage to get through it all and I don't hate it. It was... alright.

Erika Christensen, Busy Philipps, James Pickens Jr., Victor Garber, Ken Jenkins A small town is rocked by a shooting at its high school that results in nine deaths and serious injury to one popular female student, Deanna (Erika Christensen). As a detective (Victor Garber) looks for those responsible, his concentration turns to a defiant outcast named Alicia (Busy Phillips). With her involvement still in question, Alicia visits Deanna in the hospital, and the two forge a rare bond over what they saw that fateful day. ~~~~~~~~~~~~~~~~~~~~~~~~~~~~~~~~~~~~~~~~~~~~~~~~~~~~~~~~~~~~~~ Very raw movie about two young girls picking up the pieces after the killings at their high school. I thought it was a powerful movie with great performances by Erika Christensen and Busy Philipps. Never does the movie ever lighten up. Which I don't think a movie about a high school shooting should. It shows the aftermath of how those who remain alive are forever traumatized by this horrendous act. Alicia's issues run deeper then just the school shootings, and by the end of the film it touches on them. The movie runs long, a little over the 2hr mark, but the performances by the two main characters where good enough that I didn't mind. It's basically about these two girls who come from very different lives finding comfort in each other in coping with what life's troubles have left them with.