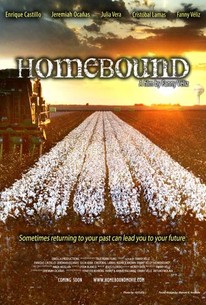 In this drama, a young man named Richard (Jeremiah Ocanas) leaves his successful corporate job to return to his hometown of El Campo in south Texas, where his estranged father Gilberto (Enrique Castillo) is dying of cancer. Gilberto wants his son to take over the family bar - the place that is the main source of Richard's bad memories of both his father and the town. But, as he spends more time in tiny El Campo, Richard begins to re-connect with old friends and even meets a new one in Sofia (Fanny Veliz), a Venezuelan immigrant who works at his father's bar. Veliz also directed Homebound and penned the script.

There are no critic reviews yet for Homebound. Keep checking Rotten Tomatoes for updates!

There are no featured reviews for Homebound at this time.