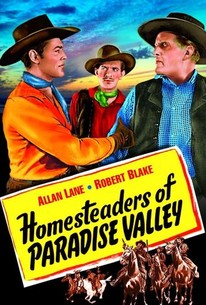 Regular "Red Ryder" series villain Roy Barcroft took a well-earned breather in Homesteaders of Paradise Canyon. The equally disagreeable Gene Stutenroth (aka Gene Roth proved a fair enough substitute, however, as Bill Hume, a homesteader so disgusted over the fact that the government land he was promised for free instead goes for two dollars per acre that he hooks up with villainous newspaper publisher A.C. Blaine (Milt Kibbee). Having guided the homesteaders to Paradise Valley in the first place, Red Ryder (Allan Lane) manages to persuade his charges to remain despite the exorbitant price of land, much to the chagrin of Blaine and his cohort Langley (Emmett Vogan), who do their level best trying to scare the settlers away from the potentially lucrative valley. When Red goes undercover as a driver for Blaine's stagecoach line, young settler Steve Dill (John James) accuses him of treason and incites the settlers against him. It all comes to a showdown at the Hume ranch, where Bill's brother Rufe Mauritz Hugo) is shot before he can confess to his brother's treachery. Bill manages to get away, but Red mounts Thunder and tracks him down. Implicating his bosses Blaine and Langley, Bill is carted off to jail.

Martha Wentworth
as The Duchess

Milton Kibbee
as A. C. Blaine

There are no critic reviews yet for Homesteaders of Paradise Valley. Keep checking Rotten Tomatoes for updates!

There are no featured reviews for Homesteaders of Paradise Valley at this time.