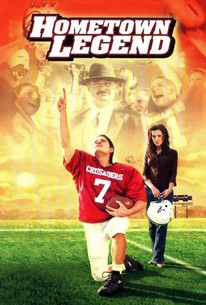 Produced by Jerry B. Jenkins of Left Behind and Navigators fame, Hometown Legend tells the story of a small Alabama town where football and faith come together. The downtrodden town has seen better days, and the community's high school is scheduled to close at the end of the year. In honor of the school's final year, the legendary coach of the once intimidating football program returns to give the kids another shot at glory. The no-nonsense coach (Terry O'Quinn) not only brings pride back to the team, but gives the town as a whole a glimmer of hope. The same tactics used in football--sacrificing individual goals and rather working for the sake of the team--becomes a metaphor for what the town needs to get back on its feet. Hometown Legend features Lacey Chabert and Nick Cornish.

Kelli Garner
as Josie
View All

Hard to muster much care

This movie surprised me, and in a wonderful way. I suggest viewing it to anyone who likes happy endings that aren't over the top happy endings.