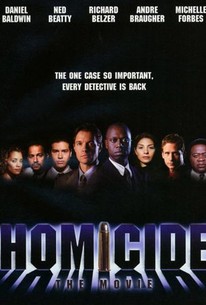 Some six months after the cancellation of the popular, hard-hitting TV cop series Homicide, most of the cast members were reunited for a two-hour TV movie, which deftly (and somewhat surprisingly) combines stark, raw realism with Sartre-esque flights of fantasy. Several members past and present of the Baltimore Police Department's homicide squad are brought back together when their former skipper and current mayoral candidate, Al "G" Giardelli (Yaphet Kotto), is gunned down by a would-be assassin. As former partners Frank Pembleton (Andre Braugher) and Tim Bayliss (Kyle Secor) conduct their own personal search for the perpetrator, the comatose "G" discovers that not all police review boards are conducted by the living. ~ Hal Erickson, Rovi

Dina Napoli
as Herself
View All

Critic Reviews for Homicide: The Movie

If you aren't already a fan, you may be mystified. If you've always been one, though, this is closure -- like a guillotine.

Audience Reviews for Homicide: The Movie

Exciting, but at times heavy-handed. Worth a watch if not for William H. Macy calling people faggots and telling other detectives to shut the fuck up.

Good movie, well acted. I have rated it highly because it was obviously of a high standard, but for me personally, I didn't love it, and would not watch it again. It is a little confusing, and the racism issues, while important, ruin what would have - for me - worked better as a straightforward crime movie. I am sure there are many who would enjoy this.

Finally tracked this one down and I'm glad that I did. The dialogue is very Mamet which means incredible dialogue and monologues that actors will be using for auditions for years to come. Joe Mantegna delivers well.

Tim Sullivan: Hey, you got some... you got some heavy troubles on your mind? Huh, babe? We'll work it out. We'll play some cops and robbers. We'll bust this big criminal. We'll swagger around. A crime story that combines a police procedural and a cop's journey to learn more about himself. Written and directed by David Mamet, this means the film has a very stylized sense of dialog, which I am a fan of. Its a solid film, if a bit slow, but it provides a good story and a quality lead role for Joe Mantegna. Mantegna stars as Det. Bobby Gold, a good cop, who has just gotten a hold of a high profile case along with his partner, Sullivan played by William H. Macy. This case involves an FBI most wanted criminal, and Gold has a few ideas on how to capture him. A snag in the plan occurs; however, when Gold, en route to another crime scene, happens on a murder scene. This scene involves the murder of an elderly Jewish woman, who ran a candy shop. Gold was the first on the scene, and with the family realizing that Gold is also Jewish, they use their high social status to put Gold on the case as the lead detective, to the dismay of Gold, who is now not involved in the high profile case he wanted. While Gold is Jewish, he does not respect the religion or himself and has no concern for the case. As the film goes on, however, Gold begins to find a curiosity in what has actually happened, as well as developing a deeper connection to his own roots. The film becomes an interesting character study about Gold, who moves between the two cases he is involved with. I like this film for the same reason I like most Mamet films, the rhythm of the dialog: Bobby Gold: Man's got no call to question my loyalty. Tim Sullivan: How's your head? Bobby Gold: He had no fuckin' call to get racial on me. Tim Sullivan: So he called you one, you called him one. We get to the gym... Bobby Gold: Sonofabitch is gonna go. Tim Sullivan: Yeah, I feel it too. Bobby Gold: Piece'a cake. Tim Sullivan: Either piece'a cake or a slice'a life, you notice that? Bobby Gold: Yeah, I've remarked that, ain't that the truth? Tim Sullivan: That is the truth. The way Mamet has scripted his scenes pulls me in. This especially goes for the banter between Mantegna and Macy. There are some poorly cast actors here and there that can't deliver Mamet dialog very well, but for the most part, the cast is solid. It also helps that the film has a very natural feel as a police procedural. While probably not perfect, the handling of the daily police work aspect is effective at keeping a real feel for the film. Roger Deakins' cinematography certainly helps make the film look very good as well. A couple twists towards the end of the film pull everything to an interesting conclusion and has the overall film work as a solid feature. Bobby Gold: You sorry fucking sack of shit. You shot my partner. Randolph: Yeah, man, and you could have paid me back if you would have brought your gun. That was your mistake, man.