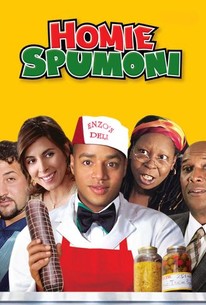 Donald Faison, Jamie-Lynn DiScala, Joey Fatone, and Whoopi Goldberg star in actor-turned-writer/director Mike Cerrone's identity crisis comedy concerning a young black man raised as an Italian-American. Renato may be black, but don't tell him that. Ever since he was just a young boy Renato was raised by Italian-Americans, and now that he's a grown man he refuses to even consider that he might be anything else. All of that quickly changes, however, when Renato's birth parents show up one day in an attempt to make good on the misdeeds of their past. When Renato realizes that he has been black all along, he rejects his Italian family, breaks-up with his Jewish girlfriend, and makes a concerted effort to connect with his true origins. But as Renato is about to realize, he will never truly become the man he was born to be if he isn't comfortable in his own skin.

A narrow-minded flick that squanders its potential by choosing to trade in so many superficial stereotypes promoting a backwards-thinking definition of what it means to be African-American.

An equal opportunity take-no-prisoners, smooth satirical sendup of the state of race relations in the country right now.

There are no featured audience reviews yet. Click the link below to see what others say about Homie Spumoni!