Hondo and the Apaches1967 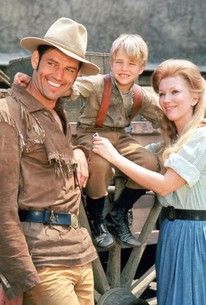 Hondo and the Apaches Photos

Released theatrically in Europe, Hondo and the Apaches was stitched together from the first two episodes of the Hondo TV series, telecast September 7 and 15, 1967, which in turn had been based on the Louis L'Amour novel Hondo and the 1953 John Wayne film of the same name. Ralph Taegar plays the title role of western U.S. Army agent Hondo Lane, with Noah Beery Jr. as sidekick Buffalo Baker. Guest-star Robert Taylor is given top billing, but his participation is secondary to the main plotline: Hondo is told to help make peace with Indian Chief Vittoro (Michael Pate), whose daughter--Hondo's wife--had been killed by the Cavalry. Once the peace pipe is smoked, Hondo must deal with a renegade Native American who threatens the peace by randomly attacking settlers. The original TV series Hondo lasted only 13 weeks, knocked off in the ratings by the competing Star Trek.

Critic Reviews for Hondo and the Apaches

Audience Reviews for Hondo and the Apaches

Just a plain old western, You have your cowboy raised by Indians, and whose dead wife is the daughter of a chief. You have Bad Indians shooting and Killing Good White Men, and Bad White Men Killing Good Indians, The Major wants a treated. All that make your basic western including the pretty White Blond Blue Eye Women. Nothing here worth going out of the way for.

Hondo and the Apaches Quotes