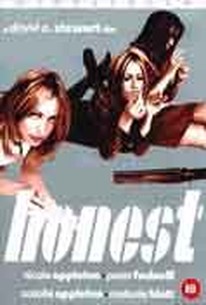 Composer, songwriter, and half of the pop band Eurythmics, Dave Stewart makes his directorial debut with this wacky caper comedy set in the heart of 1960s-era swinging London. Starring three members from British girl band All Saints, the film focuses on a trio of sisters -- cocky Gerry (Nicole Appleton), horny Mandy (Natalie Appleton), and amiable kid sister Jo (Melanie Blatt) -- who tape down their breasts, don facial hair, and crack safes in order to help their depressed widowed dad. Local crime lord Duggie Ord (Corin Redgrave) believes that Gerry knows who the thieving lads are, but he has no idea that the real culprits are right in front of his face. While casing a gem dealer on Carnaby Street, Gerry gets herself hired in alternative magazine Zero, which is housed in the same building. There she meets the decadent publisher, Andrew (Jonathan Cake), an upper-class fop, and American Rhode scholar turned draft-dodger Daniel (Peter Facinelli), who takes an immediate liking to Gerry. While Daniel works late, the larcenous trio break into the building and steal a fortune in jewels. On the way out, Daniel runs into Gerry in male garb and the two duke it out until mid-tussle he realizes that his opponent is actually the same young lass he has fallen for. This film was screened at the 2000 Cannes Film Festival. ~ Jonathan Crow, Rovi

It's actually worse than the Spice Girls movie.

A pretty decent black comedy/love story with a good amount of humour to. Set in the swinging 60's in East London. The girls from the band All Saints star in this along side a good array of English acting talent. The girls look to rob places up town to get a better way of life for their family but get mixed up in all sorts of trouble way above their heads. An enjoyable film catch it if it's on.