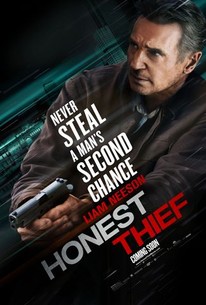 When experienced bank robber Tom Carter (Liam Neeson) meets Annie (Kate Walsh) and falls in love with her, he resolves to change his ways and start anew. First on his to-do list is to turn himself in for the $7 million loot he has been hiding at the storage facility where he works. He, however, quickly realizes that the FBI isn't as pristine as he thinks it is and that crooked and corrupt officials litter its ranks. Soon, he finds himself having to fight to clear and protect his name. Directed by Mark Williams.

With Neeson well within the confines of his comfort zone, tailed by corrupt cops and diving out of hotel windows, the film should be better. Yet it drags...

Honest Thief is a small-scale, low-budget, minor-league affair. That wouldn't be a problem if cinematographer Shelly Johnson had the imagination to compensate for the lack of spectacle, but the story is as familiar as it is tame.

Liam Neeson was 56 when Taken came out in 2008, launching his vengeful vigilante phase. Twelve years on, he's still churning out serviceable action thrillers like this one...

By the standards of Liam Neeson thrillers, Honest Thief is pretty weak tea, a passable, low-octane action movie that doesn't do much more than steal one's time.

The romance is sweet, but the action is nowhere near plausible.

A tedious, overlong embarrassment that not even Liam Neeson's craggy countenance can save.

In all, Honest Thief is decent, glossy, violent and fun.

Liam Neeson may be doing God's work dragging Honest Thief to something like interesting, but even he can't work miracles.

Honest Thief leaves a lot to be desired. [Full Review in Spanish]

There is enough action in this Neeson film to please his fans.

Honest Thief is an all too familiar Liam Neeson outing. But a unique plot with unpretentious performances and some thrilling moments make it worth your while.

Taken has run its course...the next time you get this script, Liam, just say no...

There are no featured reviews for Honest Thief at this time.