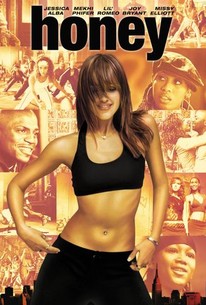 Critics Consensus: An attractive Jessica Alba and energetic dance numbers provide some lift to this corny and formulaic movie.

Critics Consensus: An attractive Jessica Alba and energetic dance numbers provide some lift to this corny and formulaic movie.

Critic Consensus: An attractive Jessica Alba and energetic dance numbers provide some lift to this corny and formulaic movie.

Dark Angel-lead Jessica Alba stars in the title role of this film, the feature debut from music-video director Bille Woodruff. Honey is a girl from the streets who works in a record store, teaches the occasional dance class at a community center, and treks downtown every weekend to hit the clubs and try out some new moves. There, she meets a music video producer (David Moscow) who offers her a chance to be a choreographer -- but at a price she eventually learns she's unwilling to pay. Determined to pick herself back up, Honey goes back to the inner-city of her youth with plans of starting a dance school. Lil' Romeo co-stars as Honey's protege; other real-life musicians (including Missy Elliott, Tweet, Jay-Z, and Ginuwine) appear as themselves.

Missy Elliott
as Herself

Suga May
as Street Dancer

Sheek Louch
as Himself

Shawn Desman
as Himself

Harmonica Sunbeam
as Herself

Rodney Jerkins
as Himself

Silkk the Shocker
as Himself

Jesse Santos
as Dancer
View All

Honey is just dumb but teens love it.

This is fairy tale stuff, its saintly hip-hop heroine far too worthy for comfort and its dialogue hilariously banal.

Occasionally preachy and always predictable, it's nevertheless executed with efficiency and a little charm.

The girl's gotta dance -- and meets little resistance -- in this hip-hop take on an age-old theme.

The star-is-born trajectory nourishes some howlers ... as well as a thumpingly unsubtle portrayal of the creative process.

There is body horror here too, and a recognisable seam of 1950s paranoid SF, but at heart this is a slow-burning allegory of the radical change that comes with marital commitment

Oooh boy, whoever greenlit this baby is going to have some explaining to do.

Alba's quite easy on the eye, and admittedly, a bit of a star in the making.

What does Honey do in the face of dilemma? Come see this touching film to find out.

Some dazzling acrobatic dance moves, but the story is pretty lame. The DVD, however, with quality extras, rates a B.

A preposterously transparent attempt to market hip-hop in as anodyne a way as possible, but -- for its target audience of pre-teenage girls -- it works.

Not bad for a dance film fitting in around the hip-hop scene. It has a good cast, some good dance scenes but not with any real wow factor. Unfortunately it becomes all a bit predictable and it's not as dramatic as I think they hoped for. It's no Save the last dance, but still not bad for a dance flick.

Such an inspirational film. The soundtrack was amazing and the ending of the film couldn't help but make you smile. Full of positivity and really motivates you. It wasn't a bad film for Jessica Alba to start with at all.

"We just peoples." Can you believe that I once actually went to the movies to see this? Sure, I was like 16 at the time. And I was on a date. But that's still kind of embarrassing. You usually couldn't get me to touch one of these movies with a ten foot pole. The whole "dancing" genre just does not appeal to me in the least. But there's exceptions to every rule, and Jessica Alba is an exception to every rule. So against my better judgment, I gave Honey a try. Every imaginable clichÃƒÂ© from this kind of movie is conveniently collected here in one neat package. The impossibly sweet and sunny heroine with a heart of gold, who achieves her dreams of dancing, but must deal with the sinister pitfalls that come along with success. The stern, disapproving parent, who is totally convinced that their child is throwing away her talent. The rift that grows between the main character and her friend, as her career takes off. The perfectly diverse, multicultural cast. The whitewashed, sanitized view of "urban culture", where the only bad guys are the drug dealers (whom the precious children are saved from in the end, of course). And the horribly unnatural "slang", that no real person on earth actually speaks like. Some of the meager entertainment that Honey has to offer, comes from how forced and hilariously awkward the dialogue is. Your tolerance for all that could possibly be much higher than mine. I'm the guy who automatically turns up his nose at any dross like this, churned out just to appeal to young urban (a.k.a. black) people. Surprise, some of us are immune to this kind of derivative, pandering nonsense. What I am thoroughly UN-immune to, though, is attractive young actresses. The star of this movie, in particular. So maybe I'd better climb back down off my oh-so-high horse. Getting to see Jessica Alba half-dressed and dancing around suggestively - holds some appeal for me. Not nearly enough to rescue this movie, but enough to make me not rip it out of my DVD player and throw it in the garbage. What can I say? I'm male.