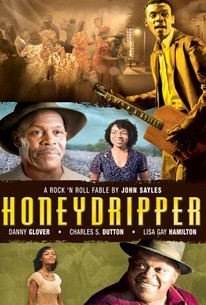 It's 1950, and it's a make or break weekend for Tyrone Purvis, the proprietor of the Honeydripper Lounge. Deep in debt, Tyrone is desperate to bring back the crowds that used to come to his place. He decides to lay off his long-time blues singer Bertha Mae and announces that he's hired a famous guitar player, Guitar Sam, for a one night only gig in order to save the club. Into town drifts Sonny Blake, a young man with nothing to his name but big dreams and the guitar case in his hand. Rejected by Tyrone when he applies to play at the Honeydripper, he is intercepted by the corrupt local Sheriff, arrested for vagrancy and rented out as an unpaid cotton picker to the highest bidder. But when Tyrone's ace-in-the-hole fails to materialize at the train station, his desperation leads him back to Sonny and the strange, wire-dangling object in his guitar case. The Honeydripper lounge is all set to play its part in rock 'n' roll history.

Steve Holmes
as Deputy No.1

While this may not be the rowdiest birth-of-rock-'n'-roll film ever made -- it's very likely the least rowdy -- Sayles addresses a transitional moment in his own patient, precise way.

It survives on its versatile leads, its smoky cinematography (courtesy of Dick Pope) and its seductive musical performances, which run from gospel to jazz to blues to the to the electrifying kick-start of early rock 'n' roll.

Even more than the music in this musically rich picture, the great pleasure of Honeydripper is in watching Danny Glover as Tyrone Purvis, the club owner.

Although Honeydripper won a screenplay award at the San Sebastián Film Festival, it's not Sayles' strongest work. Part of the problem is that it keeps building to a rock-'n'-roll payoff that never quite arrives.

Trudging nobly under a mantle of impeccably earnest intentions and a fussy, too-quaint-by-half production design, Honeydripper lags and drags to its utterly predictable end. There's not a spark of spontaneity or soul about it.

It has all the reliable components of Sayles' films: a strong social conscience; well-drawn characters whose lives overlap convincingly; a languid pace that allows for the honest unfolding of their foibles and fears; a vivid evocation of a place and time.

Like a rich and fading tapestry, the film successfully manages to create a lost world, a lost time.

An endearing and heartfelt elegy to the subtle changes taking place to a small Alabama community in the early 1950s.

An engaging and inspirational tale... handled with graceful understatement.

It's optimistic, and maybe it doesn't have a heck of a lot to do with history, but it's a tale well told.

It's a leisurely paced period musical drama set in the Jim Crow south of the 1950s that's steeped in the black southern mores ... .

John Sayles, after 27 years and 16 films, is the ancient mariner of independent cinema, navigating the constantly swirling waters of the genre with passion and skill.

Despite a charismatic cast and good music, Honeydripper feels dull and lifeless.

John Sayles is an odd filmmaker in that his work seems oddly isolated from everything else Hollywood puts out. He?s almost a textbook example of what an auteur is, in that one can guess he directed a film simply by watching a single scene, but pinpointing why his work is recognizable is not always as easy as it is with other filmmakers. There?s something in the dialogue, the way the actors behave, and the ambitious aim of his uniquely American stories that positively define his work behind the camera. His newest film, Honeydripper, was mostly ignored in theaters and I had hoped that it would be an underappreciated gem; unfortunately it?s minor Sayles at best. The film is set in a fictional Alabama town of Harmony during the very early 1950s. The film specifically focuses on Harmony?s black community, particularly a tavern/dance hall called the Honeydripper. The venue is owned by Tyrone Purvis (Danny Glover), but it has fallen on hard times. Purvis is in danger of losing the place to a loan shark, so he and his friend Maceo (Charles S. Dutton) plan a last ditch effort to stay in business by bringing in a famous blues musician named Guitar Sam to play a big gig that would generate enough money to pay Purvis? rent. Purvis has recently drifted away from his wife Delilah (Lisa Gay Hamilton) and is also being threatened by the town?s racist sheriff (Stacy Keach). Meanwhile a young man named Sonny (Gary Clark Jr.) has arrived in town carrying a guitar case and interested in auditioning at the local music scene to make ends meet. Purvis can?t really afford the show he plans to put on and it becomes clear that the evening?s entertainment will be a make or break night for him and the Honeydripper. There was a lot less music in the film then I had expected, the story clearly deals with people who have music as a major part of their life, but the soundtrack is not loaded with period music. There is a great performance scene toward the end which features the use of a very early electric guitar, the music played is a primitive and toe tapping form of rock and roll. The movie?s main problem is mainly that it has a lot of southern clichés. Among the types to be found here: a redneck sheriff, an eager young man gone to town to make something of his music career, a white southern housewife oblivious to the rest of the world, and a blind old coot who plays guitar on main street stoops. Occasionally Sayles will do some unexpected things with these types, for instance that Sheriff proves to ultimately be more interested in getting free chicken than oppressing people just for the fun of it, there?s also a neat twist with the blind old coot. Danny Glover is probably the best thing about the film, he?s got just the right ability to seem like a nice and likable guy, but still having a certain gruffness to his character. It?s clear that Glover?s character has seen a lot over the course of his career as a bar owner and blues enthusiast. He?s a character that clearly has a past and the audience easily gets the gist of it without the movie explicitly showing or describing much of it. In final analysis, Honeydripper is just a very average and fairly forgettable film. It has a neat atmosphere, the story works well enough, but it?s just a very small trifle of a film. Had I seen it in theaters I would have felt vaguely ripped off, and I?m not sure I?d even recommend it as a DVD rental. But, if you see it on cable or something like that I do think it?s worth giving a shot.

Dull. John Sayles tries to be too cute and ends up creating a snoozer. Why should we care about these characters?

[font=Century Gothic]"Honeydripper" starts on a Saturday night in Harmony, Alabama in 1950 and the Honeydripper Lounge is certainly not jumping. Its proprietor, Tyrone(Danny Glover), even sends his star performer, Bertha Mae(Mable John), home. Tyrone is married to Delilah(Lisa Gay Hamilton) who supports him despite her attending revival meetings. She hopes to save up enough money to send her daughter, China Doll(Yaya DaCosta), to beauty school, so she can make a better life for herself. But Tyrone cannot afford to even buy alcohol and he is behind on the bar's rent, forced to eviction unless he can come up with the money quickly. He hopes that the popular Guitar Sam coming to play will turn his fortunes around. Meanwhile, a young guitarist(Gary Clark Jr.) gets off the northbound train...[/font] [font=Century Gothic][/font] [font=Century Gothic]Written, directed and edited by John Sayles, "Honeydripper" is a partial return to form for the great director with another slice of Americana, where music is only part of the story. Racism is at the heart, but not in any melodramatic fashion, more in an everday fashion. As somebody else said, these people would not lead such awful lives if they did not have to. So, they need a place somewhere on Saturday night to forget their troubles, be it a bar or a revival meeting with promises of a world better than this one. The crossroads is both a literal and a metaphorical place, for music where blues are about to turn into rock and roll and also where the modern civil rights movement is about to start up. [/font]