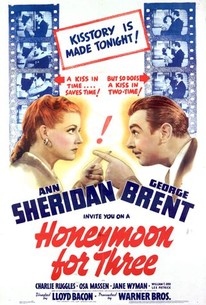 Ann Sheridan and her then-husband George Brent did their expected box-office duty in the Warner Bros. comedy Honeymoon for Three. Brent plays confirmed-bachelor novelist Kenneth Bixby, who wards off marriage-minded females by pretending to be married to his secretary Anne Rogers (Sheridan). Complications begin piling up when Bixby is arduously pursued by his old flame Julie (Ona Massen), now wed to provincial stuffed-shirt Harvey Wilson (Charles Ruggles). The supporting cast includes such Warners "regulars" as star-to-be Jane Wyman and future producer William T. Orr (who happened to be Jack Warner's son-in-law), not to mention Walter Catlett as a funny waiter. Honeymoon for Three was based on the venerable stage play by George Haight and Alan Scott. ~ Hal Erickson, Rovi

Critic Reviews for Honeymoon for Three

There are no critic reviews yet for Honeymoon for Three. Keep checking Rotten Tomatoes for updates!

There are no featured reviews for Honeymoon for Three at this time.