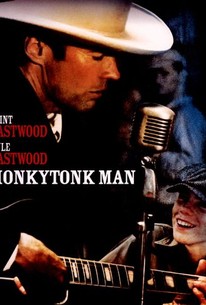 Critics Consensus: Clint Eastwood succeeds in revealing his softer side in Honkytonk Man, a surprisingly sweet and heartwarming road movie that hums along at a pleasant pace.

Critics Consensus: Clint Eastwood succeeds in revealing his softer side in Honkytonk Man, a surprisingly sweet and heartwarming road movie that hums along at a pleasant pace.

Critic Consensus: Clint Eastwood succeeds in revealing his softer side in Honkytonk Man, a surprisingly sweet and heartwarming road movie that hums along at a pleasant pace.

Clint Eastwood directed this low-key road movie, a deliberate change of pace from his dark and violent screen persona. Eastwood is Red Stovall, an amateur country singer/songwriter in the Depression-era 1930s, who dreams of singing success in Nashville. Red's death-rattle cough makes him realize that his time is running out; after sleeping off a one-day drunk, he announces to his family that he plans to head off to Nashville and try to make it to the Grand Old Opry. He and his nephew Whit (Kyle Eastwood) pile into his touring car, along with Grandpa (John McIntire), who wants to visit some folks in Tennessee. They drive off down the road and, after visiting a gambling house, pick up a young woman, Marlene (Alexa Kenin), who joins the traveling show onward to Nashville, where Red hopes to audition at the Opry and make a recording.

It is a guileless tribute not only to plain values of plain people in Depression America, but also to the sweet spirit of country-and-western music before it got all duded up for the urban cowboys.

The whole thing veers wildly in quality, and no Eastwood-hater should go within a mile of it; but few lovers of American cinema could fail to be moved by a venture conceived so recklessly against the spirit of its times.

This is a sweet, whimsical, low-key movie, a movie that makes you feel good without pressing you too hard.

The film comes across sympathetically but unconvincingly, as an attempt by a well-established movie tough guy to reveal his tender side.

Today it looks much better, and contains one of Eastwood's most openhearted performances.

More of a curiosity piece for followers of Eastwood than a truly compelling story.

One of the unnoticed treasures of the '80s.

Uneven, indulgent and overlong, but, perversely, it still has a few good moments: the appearance of the some country greats, Eastwood's character trying to sing through his illness, the picturesque scenery.

A real gem of a film that's filled with humor and heart, a lot of heart. Clint Eastwood put away his tough guy image for a personal project that delivers in a wonderful way as solid entertainment. Eastwood is absolutely superb, one of best performances, its up there with Million Dollar Baby, Gran Torino and Bronco Billy. Clint and his son Kyle Eastwood shine together in this warmhearted adventure. A beautiful masterpiece. Director, and star, Clint crafts a truly remarkable and magnificent movie that will shine as one of his true classics.

A bittersweet character study, it works remarkably well. You even begin to believe Clint Eastwood in the role. The star's son, Kyle Eastwood, makes an impressive film debut.